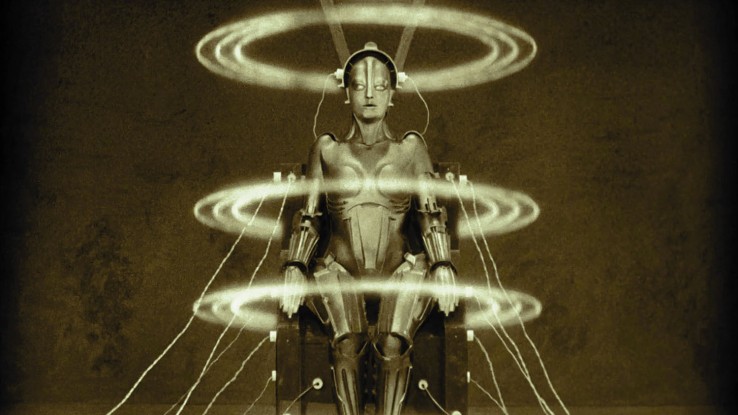 “The mediator between the head and the hands must be the heart.”

Tracing a genre of art to an original source can be murky, but the 1927 film Metropolis was definitely the first real sci-fi movie. Directed by Expressionist Austrian-German director Fritz Lang (M, Fury), Metropolis wrote the formula that would be followed for years to come. Being 90 years old, there are technical and artistic aspects of the movie that don’t hold up well; but the message and style of the movie, as well as its historic significance, merit viewings even today.

The plot shows us a future where the gap between the upper class and the working class is enormous. Workers toil underground with little reprieve, suffering to keep the city running. The aristocracy lives high above the city, spending much of their time in “pleasure gardens,” living frivolously and freely. Freder, the son of the ruler of Metropolis, encounters and falls in love with Maria, a religious leader who gives hope to the working class. He witnesses the atrocities the working class live through and vows to do something to make it better.

Let’s all watch as the world goes to the devil!

The basic message of Metropolis is that if leaders and decision-makers fall out of touch with the people doing the work, that gap will widen and bad things will happen. The proposed solution is empathy, which goes both ways, and it often takes someone who has experienced both to mediate between them. The message is simple and fairly blatant in the movie, but extremely relevant to 1920s Germany and still very much relevant today. It’s a cautionary tale that I see being ignored today, and it basically spells out many of the political factors in Germany that led to the rise of the Nazis and German nationalism only six years after this film.

Metropolis is notable for pioneering the portrayal of highly advanced (for the time) technologies. It had a robot as a main plot device before most people knew the word robot—it’s called “machine man” in the movie to get around this lack of familiarity. Video calls are shown as commonplace—something barely fathomable in the 1920s. Though the movie may appear dated now, it was revolutionary and visionary when it was released, and cast a vision for future sci-fi films to follow.

Metropolis isn’t for everyone. It’s a silent film, with the only dialogue being conveyed in sparse title cards and much of the meaning of the film being conveyed through very melodramatic acting. At first, the difference between this and even movies from the late 1930s was jolting; but after the first 30 minutes or so, I adjusted and was able to watch normally. The movie is a fascinating piece of cinematic history, and modern sci-fi fans will be able to trace the lineage of ideas back to this source. Sci-fi fans and those interested in film history should absolutely watch this movie; for others, I’d recommend you give it a try. The movie definitely gets better as it goes along, and even silent movie skeptics may be won over by the end.