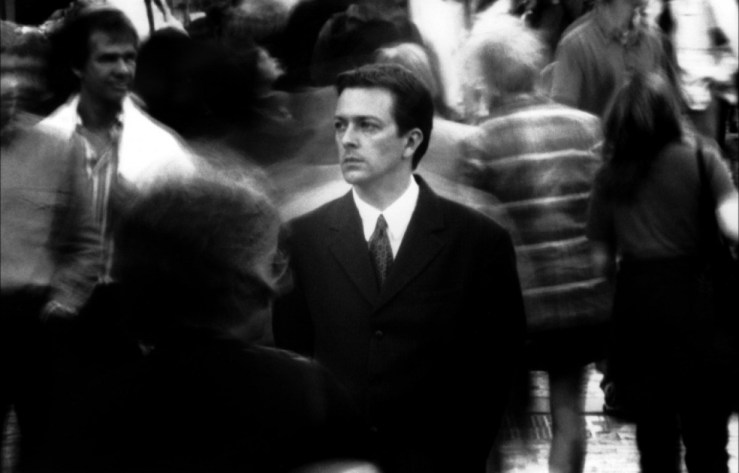 “The following is my explanation. Well, more of an account of what happened. I’d been on my own for a while and getting kind of lonely… and bored… nothing to do all day. And that’s when I started shadowing.”

It’s fun looking at an artist’s early work and seeing the ideas and themes that will play out the rest of their careers. Legendary writer and director Christopher Nolan (The Dark Knight, Inception) got his start with the low-budget indie film Following, and you can see in it the beginnings of ideas that would play out in Memento and even Inception. Though not quite as impressive as his later films, the plot and writing are still a head above most other movies and carry that trademark complexity that Nolan is famous for, and it’s amazing what Nolan was able to do on such a limited budget (estimated at $6,000, most of which was spent on film). In addition to being historically important, the film is also interesting to watch for its mystery and neo-noir elements.

The plot follows Bill, an out-of-work aspiring writer, as he begins following random strangers out of sheer boredom. The stakes are raised when one of his marks notices him, and comes over to introduce himself as Cobb. Cobb’s introduction is also an introduction to his very bizarre hobby: breaking into homes not to steal everything of value, but to peer into the lives of the inhabitants and disrupt their peaceful lives. Bill’s voyeuristic inclinations are naturally drawn to Cobb and his risky work, and Bill begins to study under Cobb and eventually changes his life to be more like Cobb. He falls into a world much bigger and much more dangerous than he anticipated, and he struggles to keep from drowning in it.

That’s what it’s all about: interrupting someone’s life, making them see all the things they took for granted. … You take it away, and show them what they had.

As with most Nolan movies, the best part about it is the complex plot. There are plenty of twists and unexpected outcomes to keep you guessing, and the story is told in a fractured timeline (think Memento), so we’re able to see how Bill ends up in some early scenes and then see how the events unfold to get him there. There’s a lot of plot packed into this short movie (70 minutes). The ending, while not totally unpredictable, is executed with care and precision that make it a joy to watch.

There’s a major theme of identity that runs through most Nolan films. In Batman Begins, we see a man struggle to change his identity; in Memento, we see a man struggle to recover it; in Inception, we see how fragile and malleable a man’s identity truly is as another group works to change it. The main theme in Following is to be sure of what identity you want before you start to change yourself. We start with Bill, a man who has no real sense of identity and purpose, and immediately meet Cobb, a man with an excess of both. This is very enticing to Bill, and he begins to emulate Cobb’s behavior before fully understanding it. I don’t want to give away the ending, but let’s just say that it would have benefited Bill to do a little research first.

As I said, Following is not as brilliant or intricate as future Nolan films, but it’s still a competent mystery that’s intriguing to watch unfold. For aspiring screenwriters and filmmakers, it’s a vital study into what can be accomplished by amateurs on a shoestring budget. And if you’re a Christopher Nolan fan at all, you will probably appreciate this early work from him.