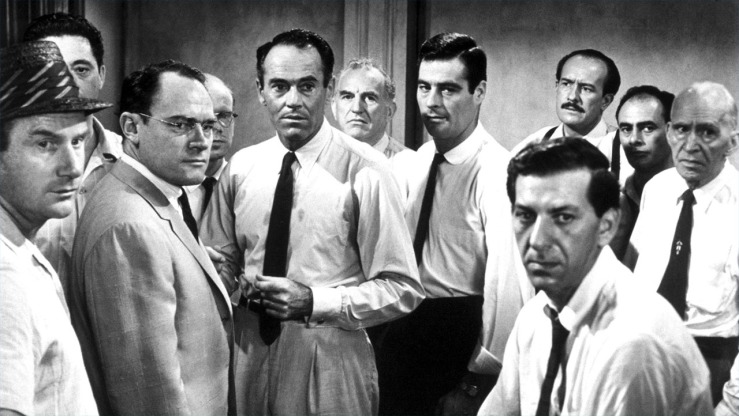 “We may be trying to let a guilty man go free, I don’t know. Nobody really can. But we have a reasonable doubt, and that’s something that’s very valuable in our system. No jury can declare a man guilty unless it’s sure.”

There are some movies that nearly everyone would enjoy, and there are some movies that nearly everyone needs to see at some point in their lives. 12 Angry Men is universally loved (it’s one of the few films to achieve a 100% rating on movie review aggregator site Rotten Tomatoes), but it’s also one I think everyone needs to see. The movie is not only an excellent drama; it’s also an excellent primer on the American judicial system, and a great parable for justice and prejudice in the modern world. Directed by Sidney Lumet (Dog Day Afternoon, Network), this relatively simple movie is absolutely flawless and earns its place as one of the best films ever made.

The story takes place almost entirely in one room where a jury is trying to decide the fate of a young man accused of premeditated murder. The case against him is strong, and the court had little to say in his defense, so eleven of the twelve jurors walk into the room convinced of his guilt. But as we quickly find out, things are not as simple as they seem. Misrepresented facts, inaccuracies, prejudices, and misconceptions are rampant, and are discussed in great detail. Both tensions and stakes are high as this group of twelve men argue about the facts and the deepest corners of their own souls.

It’s always difficult to keep personal prejudice out of a thing like this. And wherever you run into it, prejudice always obscures the truth. I don’t really know what the truth is. I don’t suppose anybody will ever really know.

Though the acting is superb and the technical aspects very competent, it’s the script that makes this film amazing. The writing is tight and polished—not a line of dialogue is out of place, and not a minute is spent without telling us more about the problem or the characters. The dialogue is well-written, memorable, and very human. Many movies from this era have not aged as well as this one. And the way the plot and arguments are laid out is extremely intricate (although not hard to follow). This is probably the best-written movie I’ve ever seen.

A group of twelve men sitting in a room arguing about facts has the potential to be, well, really boring. But that’s not the case at all here. This is a gripping and fascinating watch. And it’s not just a movie that’s fun to watch; it formulates and eloquently makes a case for some very important thoughts on the judicial system, empathy, and the nature of justice that are relevant even sixty years after the film’s release. This is a movie that will make you think and feel, and it does both very well.

Even though this is a great drama, there will be some people who don’t enjoy watching the morality tale unfold; but I still think everyone should see this movie at some point in their lives. It teaches some great things about how the judicial system works, how life can be for the lower tiers of our society, and how to recognize and get past our own prejudices and preconceived ideas. Don’t let that scare you, though. As I said, though, this is still a movie that’s widely loved and it holds up very well today. I enjoyed it a lot more than I thought I would based on the description, and its reviews and ratings are a testament to how good this movie is.