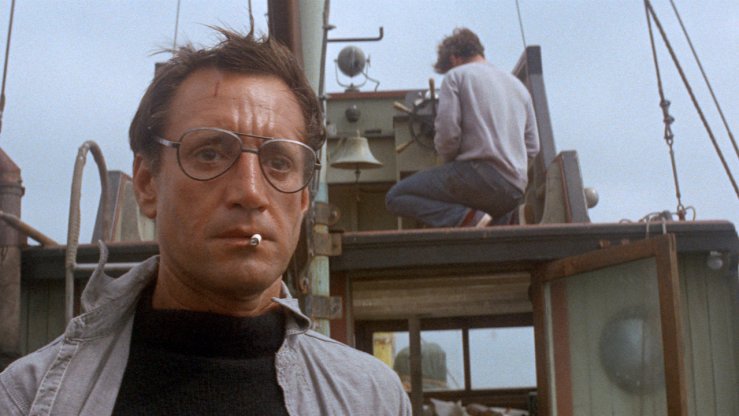 The summer blockbuster is what every production company hopes for: a movie with a little something for everyone, that people will line up at the theaters to see, that people will be quoting for years afterward, that makes a ton of money. It’s a staple in American culture now. But the movie that more or less invented this concept was Jaws, back in 1975. It made back over 32 times its production budget. It’s not a stretch to say that almost every moviegoer in 1975 saw this movie. Steven Spielberg (E.T., and come on, you know who he is) is arguably the king of modern blockbusters, and it was this movie that propelled him to to superstardom. Is it great? Honestly, it does a lot of things well, but I don’t think there’s anything it does that other movies don’t do better. But in true blockbuster fashion, there’s something here for just about everyone—no matter who’s in the crowd, this movie will probably get a positive response, even today.

The movie opens on a beach in the small northern beach town of Amity, where we witness a shark attack. This and other attacks soon draw the attention of Martin Brody, the everyman Amity chief of police, who wants to shut the beaches down until the shark threat is neutralized. There’s some resistance from the mayor, who believes that shutting down the beaches will kill the town’s economy. Shark expert and lovable nerd Matt Hooper confirms Brody’s fears that a giant killer shark is terrorizing the town, and after another very public shark attack, Brody and Hooper set off with Quint, a grizzly old sailor, on a quest to kill the shark once and for all.

Bad fish. Not like going down the pond chasin’ bluegills and tommycods. This shark, swallow you whole. Little shakin’, little tenderizin’, an’ down you go.

Spielberg has an incredible talent for mixing comedy and horror seamlessly, sometimes in the same scene, and that talent is out in full force with this movie. There are some very funny and memorable scenes, and there are also some very tense and suspenseful scenes. The climax of the movie is definitely an edge-of-your-seat experience, and yet it ends with a bit of laughter. This is definitely a movie that will keep your attention, and it’s very entertaining throughout. Even though it’s not known for its depth, there are a few very human moments with both of the main characters that make them real. Like I said, there are movies that do each of these things better, but at the time, there had never been a movie that did all of them better.

Jaws is not a film that will make you question the human experience or think deeply (though it may make you think twice before getting into the ocean). This is pure entertainment, and it does that extremely well. There’s plenty of tension, but don’t expect a lot of character growth or social commentary—this isn’t that kind of movie. This is a movie you put on when you want to have fun. It makes for a great movie night or night in after a stressful day. This doesn’t make it any less of an accomplishment in film—just a different kind of accomplishment.

Whether you love or hate big, popular blockbuster films, this is one everyone should see, partly for its influence on filmmaking even today, and partly just for cultural relevance—it’s referenced a lot. If you’re looking for a great summertime movie night, though, this is a great place to start. And come on, we all like to have fun, and this is a fun movie. If you haven’t seen it, put it on your list!