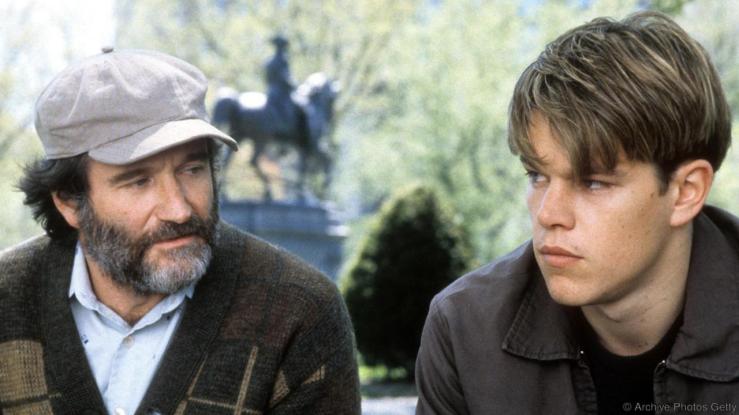 “You could be a janitor anywhere. Why did work at the most prestigious technical college in the whole world? And why did you sneak around at night and finish other people’s formulas that only one or two people in the world could do and then lie about it?”

J.D. Salinger’s Catcher in the Rye is one of my all-time favorite books. In many ways, Good Will Hunting is kind of a spiritual successor to that book. Directed by Gus Van Sant (Milk, Elephant) and starring Matt Damon, Ben Affleck, and Robin Williams, this drama captures tortured genius better than most other movies, and it gives a very detailed look at how such a man could develop—and eventually be saved. It also captures the aimlessness of youth without making the whole movie about it. It’s a moving drama with a smart script and witty dialogue and stands out as one of the best-written movies of the 90s.

The plot centers on Will Hunting, a 20-year-old janitor working at a prestigious technical college when he’s not solving nearly impossible math problems or hanging out with his misfit friends. Will had a rough past in the foster system and as a result has trouble letting his emotional guard down around just about anyone. He’s also prone to violent outbursts, which lands him in some trouble with the police. When a professor identifies him as the man who has been solving complicated equations at the college, he bails him out on two conditions: that he begins working with him at the college and that he sees a therapist. An old college friend of the professor takes on the difficult task of getting through Will’s thick wall of emotional scar tissue and initiating the healing process.

You think I know the first thing about how hard your life has been, how you feel, who you are, because I read Oliver Twist? Does that encapsulate you?

This is a brilliantly-written movie that gets a lot of things right about emotional trauma. Though the plot device is Will’s intellect, the engine that moves the plot forward is his emotional self, which is stunted and crippled from his abusive and neglectful childhood. His trauma paralyzes him and prevents him from making important life decisions—every time we start to see something good happen to him, he sabotages himself and backs out. Though entertaining at times, it is heartbreaking at its core, and the movie does a great job of portraying emotional trauma without exploiting it. Oftentimes, just as Will Hunting would like it, the trauma is buried beneath the shenanigans of his young friends and the tough-guy front he puts up to keep others out. The I’m-hurt-so-I-won’t-let-anyone-in character has been done a lot in cinema history, but this is probably the best portrayal I’ve ever seen.

The film is at times hilarious (Chuckie’s negotiation scene is pure comedy gold) and always witty, but eventually has to deal with Will’s problems, which are rather serious. This is not an overly-sad movie, but it is emotionally raw and pulls no punches in its portrayal of Will Hunting and his neuroses. In the end, it’s an uplifting film about overcoming your past and learning to care about others, but it takes a while to get there and may not end quite the way you think it will.

Good Will Hunting is an outstanding drama with witty writing and deep exploration of its lead characters. The tension is centered around personal growth, and as such may not be fast-paced enough for everyone; but the emotions and character growth are easily accessible and deeply moving. Also, the focus on emotional trauma may go completely over the heads of people who somehow have never experienced it. As someone with severe depression and as the adoptive father of a son who’s been through the foster system, I found this to be spot-on and inspirational.

1 thought on “Good Will Hunting”