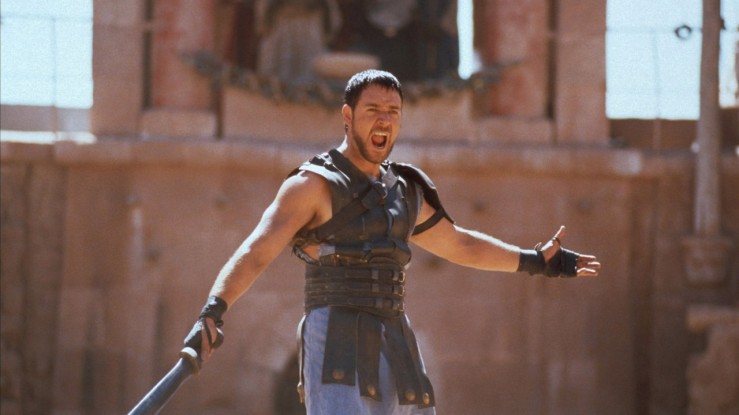 “I think he knows what Rome is. Rome is the mob. Conjure magic for them and they’ll be distracted. Take away their freedom and still they’ll roar. The beating heart of Rome is not the marble of the senate; it’s the sand of the coliseum. He’ll bring them death—and they will love him for it.”

With a few notable exceptions, epic films set in ancient Rome were hard to come by, and good ones even more so. This is surprising—the setting is perfect for an epic film with amazing fight sequences, political intrigue, rich story and lore, and strong characters. In the year 2000, before Lord of the Rings reignited our passion for epics, Gladiator filled that gap with an amazing film. Directed by Ridley Scott (Alien, Blade Runner) and starring Russell Crowe, Joaquin Phoenix, and Connie Nielsen, this is a film that brings the expansive and powerful Roman Empire to life like never before. I won’t say it’s a perfect film—it has its flaws. It’s stuck in a weird spot between a political drama and an action movie, and there are a few scenes that place dramatic flair above realism. But Gladiator is just so entertaining that it more than makes up for its flaws.

The plot follows Maximus, commander of the Roman armies, as he ends a bloody war and is eager to return home to his wife and son. He meets with Caesar, an aging Marcus Aurelius, who reveals to him that he wants Maximus to be the next Caesar instead of Aurelius’s own son, Commodus. When Commodus finds out, he murders his father, steals the throne, and orders the death of Maximus as well as his wife and son. Maximus escapes, but is sold into slavery and finds himself forced to fight as a gladiator for the entertainment of Rome. When Maximus discovers that being a great gladiator could grant him an audience with the new Caesar, he begins plotting his revenge.

Brothers, what we do in life echoes in eternity.

It’s hard to single out one thing in Gladiator that was done exceptionally well. The script, acting, cinematography, and soundtrack are all top-notch. One thing this movie does well that others don’t is bring the Roman Empire to life. You get to see everything from soldiers and common citizens to senators and Caesar himself, and you get to see how they interact and exert power over each other. As they say, a king is nothing without a kingdom, and we see Commodus obsess over and struggle with not having the admiration of his subjects. The coliseum itself is brimming with life and activity, much like it actually was in its time and much unlike historical photos depict it today. You get a real taste of what everyday life was like for Roman citizens, and this movie makes it all seem pretty straightforward.

Gladiator is, at its core, a classic revenge tale, and they make no attempt to complicate or dilute this. Maximus is a great hero, largely blameless and apolitical unless he needs to be. Commodus, though complex and nuanced, is very easy to hate and only gets worse as the film progresses. The film is very openly constructed to make you hate Commodus and root for Maximus. But the film never devolves into blatant manipulation or sacrifices its characters for its plot. These two characters, though they start in similar places, go out on different trajectories and each of their character arcs makes sense. And, honestly, it feels pretty good to have a clear-cut revenge tale like this from time to time.

Gladiator is a great modern epic with well-executed fight sequences and an immersive setting. The violence, while not excessive, is still graphic at times and might turn some people off. The action sequences are also separated by long stretches of political drama and character development, which may turn off those just looking for an action film. But I still think most people will find something to like here. Like I said, it may not be brilliant, but it’s very enjoyable and the ending is both emotional and moving. And if you’re a fan of ancient Rome at all, this is definitely a must-see.