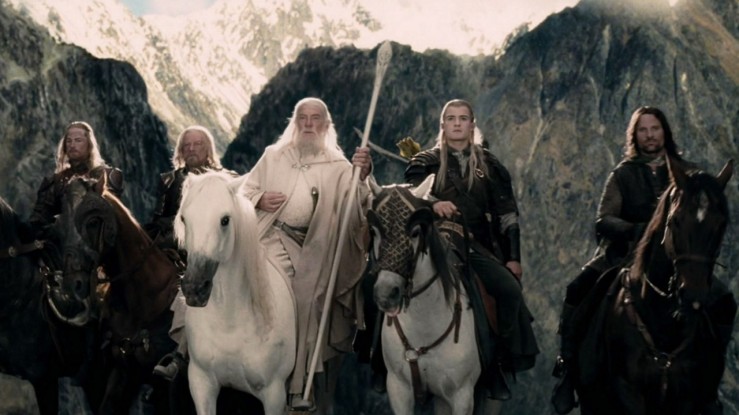 “The Ring remains hidden. And that we should seek to destroy it has not yet entered their darkest dreams. And so the weapon of the Enemy is moving towards Mordor in the hands of a Hobbit. Each day brings it closer to the fires of Mount Doom.”

Lord of the Rings: The Two Towers, the second film of the trilogy, picks up immediately where the first one left off. But with the groundwork of the plot and setting laid, it’s able to accomplish a lot more than its predecessor. The first film exuded a sense of wonder and magic as we discovered the world, got a taste of the power of Sauron and the orcs, and saw the heroics of its heroes. In this film, we see the full power of Sauron’s army and see the heroes begin to pull together an army of their own to counter it. The first film was magic and wonder, but this is pure, badass epic action, culminating in what may be the best battle sequence in any movie ever.

The plot is a bit fragmented as the group was splintered at the end of the last movie. Frodo and Samwise, transporting the powerful ring, continue their journey to destroy the ring, trying to avoid attracting attention to themselves. Aragorn, Legolas, and Gimli journey to the besieged kingdom of Rohan, whose ruler Theoden has fallen under the enemy’s spell. They seek to break the spell and recruit Rohan’s army as the orc army mobilizes. Meanwhile, Merry and Pippin, separated from the group, journey on toward enemy territory to do whatever they can to help the cause. All end up facing tremendous odds and overcoming much in their quest.

The women of this country learned long ago: those without swords can still die upon them. I fear neither death nor pain.

The best part of this movie is, without a doubt, the epic battle of Helm’s Deep. Start to finish, the battle is nearly an hour of screen time and is not only the best Medieval battle in cinema history, but probably ranks in the top five battles of any sort in any movie. It’s that good. I was lucky enough to see this one on the big screen and remember trying to take in the scale of this conflict. My mouth was hanging open through most of it. Thousands of orcs storm the heavily-fortified but under-protected fortress and their weapons of war are intricate and impressive. The lines and lore that admittedly seemed a bit cheesy before work amazingly well here. And the conclusion to this battle does not disappoint. This amazingly expensive movie (about $94 million) made back almost ten times its hefty production budget, and it’s easy to see why.

While the first film captures the feel of that epic quest, a touching and difficult journey, the second really captures a world going to war. The scale is grander, the action is bigger, the heroes are more heroic, and everybody seems to be drawn into the conflict—even when they wish to stay out of it. There’s a line, a point of no return, that is crossed in this part of the story, and every character comes to realize that there is no going back to normal until this war is over. Character growth and development, by the way, is another great strength of this movie.

The Lord of the Rings is a great trilogy that will please almost everybody, and The Two Towers is my pick for best of the three. If you thought the first one was slow, this one is definitely not. The character development and tension are also considerably improved over the already-impressive first film. This is a film I think everyone needs to see and would enjoy. If you haven’t seen this yet, it’s well worth your time!