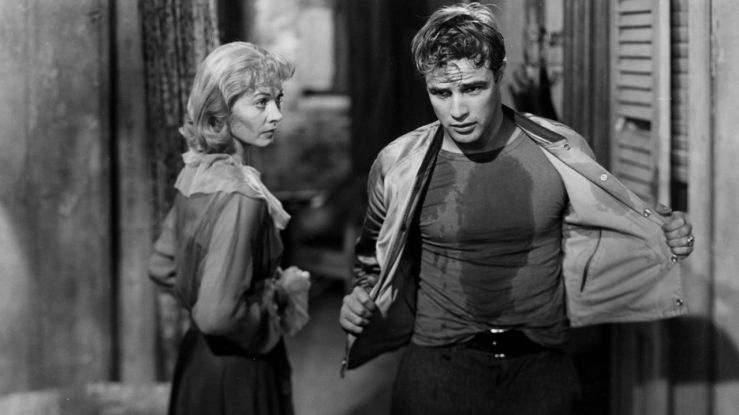 “I don’t want realism—I want magic! Yes, yes, magic. I try to give that to people. I do misrepresent things. I don’t tell truths; I tell what ought to be truth.”

When I think of the 50s, I often think of the picture-perfect, Leave it to Beaver life put forth in popular entertainment. And of course it wasn’t really like that. They were still recovering from World War II, and there were a lot of not-so-great things happening. The popular response was to sweep all that under the rug and focus on the positive, and that shaped much of the entertainment to come out of the 50s. But there was a strong counterculture movement dedicated to realism, no matter how harsh it may be.

In the 1951 novel The Catcher in the Rye, Holden Caulfield railed against “phonies,” and that cognitive dissonance eventually landed him in a mental institution. Also in 1951, A Streetcar Named Desire showed us two worldviews coming to clash: one of romanticized ideals that ignored the horrible things that were going on, and one of brutal realism that was authentic to a fault, becoming an embedded part of everything wrong with the world. Directed by Elia Kazan (On the Waterfront, East of Eden) and starring Vivien Leigh and Marlon Brando, this is a brutal look at the two mindsets inevitably coming head to head. It admittedly got off to a somewhat slow start, but very quickly in, I was hooked. Few films do drama as well as this one, and the tension builds throughout the film into an explosion near the end.

The story opens with Blanche DuBois arriving on a train to visit her sister, Stella Kowalski, for an extended stay. Blanche finds herself at odds with the dirty, “common” life Stella has found herself in, and that difference is most stark when Blanche interacts with Stanley, Stella’s husband. Stella is caught in the middle as Blanche denounces Stanley’s raw, animalistic behavior and Stanley accuses Blanche of covering up why she really left town and came to visit her sister. Tensions build, hurtling Blanche and Stanley toward an explosive confrontation toward the end.

Straight? What’s ‘straight’? A line can be straight, or a street. But the heart of a human being?

There are a lot of great things about this film, but the two lead characters, played by Marlon Brando and Vivien Leigh, are what make this movie phenomenal. Stanley’s vulgarity and aggression could have easily been watered down to where they were uninspired and forgettable, but Brando acted with such raw energy that Stanley seems more dangerous than most other characters in film. Similarly, Blanche’s loose grip on reality and frail mindset could have easily gone in either direction, either being unnoticeable or completely over-the-top, but Leigh displays just the right amount of subtlety to make Blanche seem just a bit more distant than the average person. Both also do a great job of having these characteristics build throughout the film, at first being well within the bounds of normal, but later pushing that boundary as the two mindsets they represent come to head. Brando was amazing, and this is undoubtedly the best performance of Leigh’s career.

The mood of the film is dark, and shockingly so for its time. The two mindsets here don’t quarrel over how bad things are—only in how they respond to it. And that underlying brokenness seeps into every plot point. Every glimmer of hope is beaten into submission by harsh reality. As such, this can be a depressing film to watch, but the drama and tension are anything but boring. This is a gripping emotional drama—moreso than almost any other pure drama I can think of. Neither of the two lead characters are particularly admirable, and that’s kind of the point: there’s no good option when it comes to dealing with a broken world.

I came into this blind and wasn’t quite sure what to expect, but I loved A Streetcar Named Desire. Like I said, it’s pretty depressing, even aggravating at times, but I was hooked throughout the film and really wanted to watch it all play out. If you’re looking for a powerful and gripping emotional drama, it’s tough to beat this one.