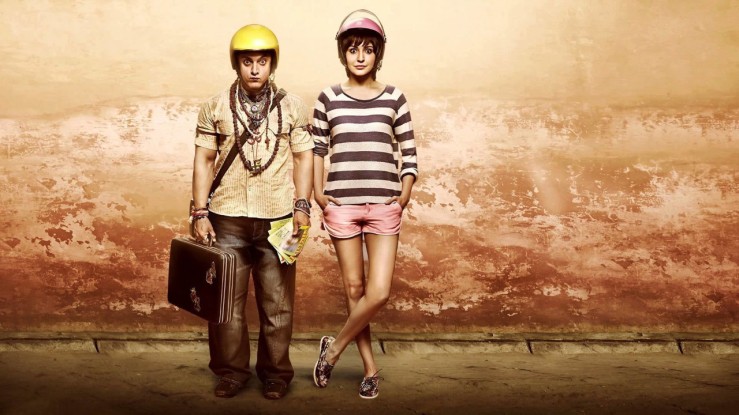 “You all say that it’s only one god. I say, no… there are two gods. One is the one who created us all. The other one is the one created by people like you.”

I’m not an expert in Bollywood film—in fact, before this past weekend, I had never watched a real one all the way through—but the category is so big, I know I can’t ignore it. Some guys at work recommended to me PK, the highest-grossing Bollywood film of all time. I have to say: I absolutely loved it. Directed by Rajkumar Hirani (3 Idiots, Munna Bhai M.B.B.S.) and starring Aamir Khan and Anushka Sharma, this film shows us a classic scenario: an outsider comes to a familiar setting (in this case, the city Delhi, which may be foreign to American viewers) and shows us how absurd we can be. But PK delves into some more philosophical issues and begins asking deeper questions about life and religion that I haven’t really seen in film before. This is also a fun, quirky comedy that’s entertaining throughout. If you’re wanting to get started in Bollywood film, this is a great place to start.

The story opens with an unnamed humanoid alien coming to Earth to investigate. The remote to recall his spaceship is promptly stolen, and he’s stranded here with no way to communicate, no knowledge of our culture, and no clothes. Eventually, he learns the language and begins to learn the culture. When he explains his problem, numerous people say things that most of us take for granted: “Only God could find that,” “Pray to God and he will help you.” So he discovers religion and takes it at face value, earnestly believing that if he can just ask in the correct way, God will give him his remote back. When he begins to discover how complex and convoluted the questions of religion are, he begins asking questions that get the entire country thinking.

I don’t have any name. But—I don’t know why—people called me ‘PK.’

As I said, this is a light-hearted comedy and there are some genuinely funny moments (most notably, when he encounters Shiva); but the truly brilliant thing about this film is the way it shows us religion through a point of view that’s completely foreign to it. As the alien asks questions, nobody takes him seriously. In fact, so many people ask him if he’s drunk (“peeke” in Hindi) that he eventually assumes that’s his name: PK. This film is definitely not anti-religion—in fact, it’s actually very pro-religion. But the statement it makes is one of understanding and tolerance—a major problem in India, where the religious landscape is much more diverse than it is in most Western cultures and where infighting between religions can tear apart communities and families. The insights in the film are admittedly not mind-blowing—I’ve heard most of these questions before—but having a film focus primarily on these questions is something I haven’t seen before, and the film explores the topic deeply.

This being my first real venture into Bollywood, of course the stylistic differences were a bit stark. (How many American movies do you see where the characters burst into choreographed song and dance bits to express themselves?) But nothing was so jarring that it pulled me out of the movie. The songs were fun, the goofy humor was endearing, and the cultural bits were easy enough to catch onto. The first hour or so of the movie was a pretty straightforward alien-can’t-understand-humans plot, but after that, it opens up to its deeper ideas and things start getting really interesting. And there was a romance subplot that was also really well-done. Everything this film did, it did extremely well, and it was very enjoyable even for this American viewer.

PK is one of those rare films that’s both funny and insightful, making you laugh and think at the same time and doing both well. And the message it sends, while vital in India, is still very relevant and important in Western cultures as well. It has a bit of adult humor—nothing too graphic, very PG-13 in nature, but it was shocking in India, and several religious groups tried to have the film banned. But I think most Western audiences will be able to enjoy this film. If you’re wondering where to get started in the world of Bollywood film, this is undoubtedly one the best films to start that journey. And if you’re wondering where to watch it, I actually found the entire film with English subtitles on YouTube for free. I can’t answer any questions as to the legality of that, but that’s how I watched it.