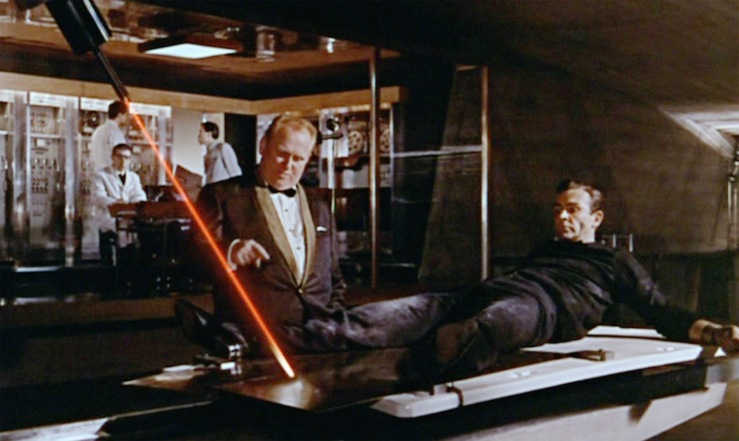 Bond films have been around so long that it’s hard to remember how innovative they were in the 60s. Now, there’s a precise Bond formula, and everyone knows what to expect in a Bond film—so much so that when Die Another Day turned the formula on its head in 2002, audiences hated it. If you’ve seen a few Bond films, you know what I’m talking about: James Bond finishes up a job, then reports back to his agency, where Q introduces him to some new gadgets. Then he meets the villain and does some gambling and wins. Then he meets the villain’s attractive female henchman. There’s lots of great action and witty one-liners to keep things light. Bond is suave and sophisticated, but tough when he needs to be. Some laws of physics are broken, but Bond films aren’t meant to be serious.

Well, that formula hasn’t been baked into every Bond film since the start. 1964’s Goldfinger, directed by Guy Hamilton (who would go on to direct other Bond films) and starring Sean Connery (the only real James Bond), may not have been the first film to feature the titular spy hero, but it was undoubtedly the first real Bond film. Its two predecessors were much darker in tone and different in structure to what we know as Bond films today. Goldfinger was the first to introduce us to Q and Bond’s gadgets, and lay out the blueprint for almost every Bond film to follow. It’s also probably the best the sprawling series has to offer. If you’re a stranger to James Bond, this is a great place to start. (Also, disclaimer: this is actually the first Bond film I’ve seen, so sorry if I get some of the details wrong here!)

This film introduces us to Goldfinger, an international gold smuggler with his sights set on something much more sinister. Agent 007, James Bond, is sent in to investigate, and then stop Goldfinger from carrying out his plan. This is the quintessential Bond film, so you know what to expect from the plot.

Just a drink. A martini—shaken, not stirred.

What really makes Goldfinger shine is Sean Connery’s portrayal of James Bond. Bond is intelligent, suave, charming, and very capable, but he’s not a superhero. When he gets into trouble, he shows real fear, even though he quickly thinks his way out of it. These little signs of humanity are sadly something the series grew out of, as the need to out-do previous films led directors and actors to show Bond as this fearless super-spy who was never in any real danger. Connery is also charming enough to convincingly get away with the audacious things Bond does when investigating and cracking the case. It may seem like a cop-out to have the hero just go up and ask the cleaning lady for the key to the villain’s hotel room, giving her nothing but a smile, but Connery will make you believe it’s possible. Connery didn’t just play Bond—he was Bond.

Though there’s some tension and real danger present, this film is light and fun, with just the right mixture of action and comedy. This is not a thinking film, nor is it really a feeling film—it’s an entertaining film, and it does that extremely well. There are a few things that feel dated—most notably, the blatant sexism and some casual racism—but there’s a simplicity to the action and use of gadgets that makes modern Bond films (and most modern action films) feel needlessly convoluted and ineffective. This film doesn’t need slow-motion action sequences or technology that’s closer to magic than reality. There were a few logical errors and needless explosions that stood out to me, but honestly, that just made it more fun to watch. I had a blast watching this.

James Bond is such an important cultural icon that you really can’t ignore him. Goldfinger is probably the purest and best example of a Bond film, and Connery is the best Bond, so even if you’re a stranger to the series, I’d recommend watching this film. It’s a great classic action film that’s very watchable today, and it’s a great way to get up to speed on the phenomenon that is James Bond. If you are a Bond fan but haven’t seen this film, I’d recommend you watch it right away!