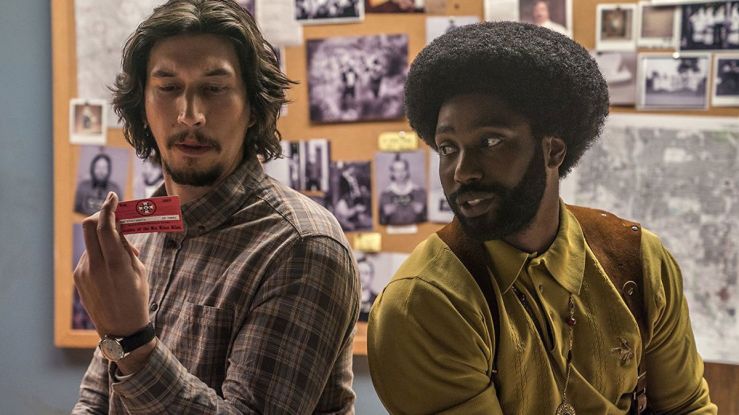 “There’s never been a black cop in this city. We think you might be the man to open things up around here.”

There are a lot of films that are good, but far fewer that are both good and important: timely, thought-provoking, painfully honest, and still entertaining. BlacKkKlansman, directed by Spike Lee (Do the Right Thing, Malcolm X) and starring John David Washington and Kylo Ren, is an entertaining film that really spells out how racism in America took its current form and went mainstream, starting in the 70s. The script is clever and it has some hilarious moments, some genuinely touching moments, and some suspenseful moments to keep it from getting dull. But the real genius of the film is how it tackles such a difficult and misunderstood topic and breaks it down and makes it easy to follow, tracing the idea’s lineage from years in the past to today. The blatant racism can be difficult to watch, but this film is undoubtedly one of the most important of recent years, especially in today’s political climate.

The plot follows Ron Stallworth, a young black man who joins the police force in Colorado just a few years after the civil rights movement began. He’s given a low-level desk job that bores him, so, on a whim, he finds a number for the local chapter of the Ku Klux Klan and calls them, pretending to be white, asking to join. This goes surprisingly well, but obviously he can’t meet them, so he gets some help from fellow officer and ally Flip Zimmerman, who pretends to be Ron for the in-person meetings as Ron goes through the process of gaining membership to the KKK. He eventually begins talking with David Duke, the new leader of the KKK who is taking it in a new direction: legal intimidation under the guise of civility. But there’s still a strong bit of incivility in the local chapter, and it’s intent on sniffing Ron out even as he’s accepted by the new wave of Klan members.

America would never elect someone like David Duke for President of the United States.

BlackKkKlansman shows us two sides of racism: a brutal side that performs lynchings, and an insidious, more subtle side that keeps non-whites subdued with prolonged intimidation and politics. Part of what makes the film so important is that even today, over 40 years after the film is set, many people think of racism only of the first variety: violent, extreme, and blatant. This means that the second form is accomplishing its purpose: operating just within the bounds of legality so that it’s permitted to go on unchallenged. In the film, David Duke had just taken over as the leader of the Klan, and his character shows us what the Klan would become. Duke is not a raging monster, like one of the other antagonists in the film. He seems like a nice guy, until he starts spouting racist propaganda, and he manages to be a somewhat likeable character—a very difficult balance. And it’s this dual nature that makes his brand of racism so dangerous. The ending of the film pulls no punches when it shows just how that ideology plays out today and how, if left unchecked, it will accomplish far more evil than the old, violent KKK ever did.

Aside from being insightful, the film has clever moments, funny moments, and suspenseful moments, but does suffer from some pacing issues. There are long gaps in-between these moments as the film tries to balance a lot of things it’s doing. If you’re seeing this for the comedy, there are long stretches without laughs; if you’re seeing it for the suspense, there are long stretches of calm. I was still very entertained by the film, but the pacing was the chief complaint I’ve heard about the film (aside from people just being uncomfortable with frank discussions of racism). This film is good, but it’s the subject matter that elevates it to amazing.

BlacKkKlansman is a timely film with some crucial things to say about America today, and it manages to be a fun film to watch on top of all of that. It will be remembered as one of the most important films on modern racism in America, and director Spike Lee does a great job of showing all sides of this difficult topic. Racism can be an uncomfortable topic, but I would urge everyone to see this film—especially those wondering what the big deal is. It’s vital that we all understand this issue so that we can start having meaningful conversations about race and begin healing the wounds of the past.