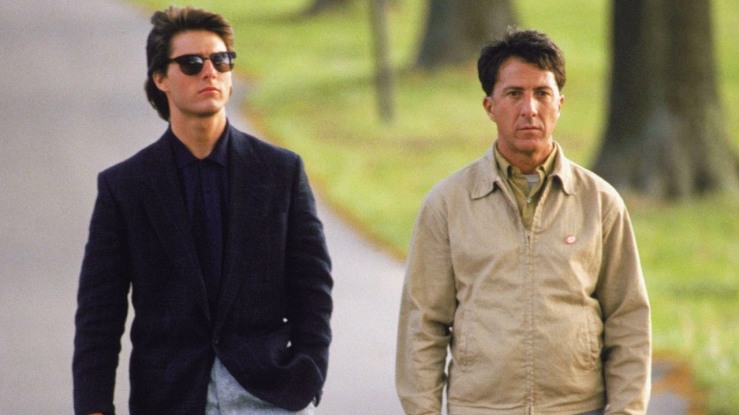 “He’s capable of a lot more than you know!”

Issues-based movies can be vital for the progress of the causes they portray, but many sacrifice plot and character development to focus on the issue, ironically hurting both the film and the cause. Rain Man is a great issues-based film that sacrificed nothing and was actually made stronger by its issue. Directed by Barry Levinson (Wag the Dog, Toys) and starring Tom Cruise and Dustin Hoffman, this film features a major character on the autism spectrum and gives us a good look at the disorder, both good and bad. Seeing as I knew almost nothing about autism until well past college, around 2003, this movie was years ahead of its time when it came out in 1988. If this film came out today, there would still be a majority of viewers who would learn something from it. Whether that’s a comment on how progressive this film was or how abysmal society is at understanding this condition isn’t for me to say. I will say that this is an outstanding drama in addition to being probably the best film about autism spectrum disorder, and it hasn’t lost anything in the 30 years since it came out.

But first, a quick public service announcement. While this film raised a lot of awareness for autism spectrum disorder, it doesn’t tell the whole story. Autism is a very broad condition, and many with the condition do not bear any recognizable similarity with the title character of this film. Autism is a spectrum, with some people like Raymond, some that struggle more to function normally, and many that function at a very high level. Rain Man is a great introduction to autism, but please don’t think that Raymond is the portrait of autism in all its forms. Many on the spectrum are much more normal than you’d think, and you probably already work and interact with people on the spectrum—people who are very good at their jobs and don’t need comparisons to Rain Man.

The plot follows Charlie Babbitt, a young car dealer whose business may not be entirely legitimate. Charlie receives word that his estranged father has passed away, so he travels across the country to help settle affairs. He discovers that his very wealthy father left to him an old car and some rose bushes, and that all the rest of his wealth went to an unnamed benefactor. Charlie does some digging and discovers that the benefactor is a doctor at a nearby mental hospital—then discovers that the doctor’s patient is his brother Raymond, whom he never knew about. Determined to get his half of the wealth, he takes Raymond from the institution and travels across the country back to Los Angeles, where he hopes to find some way to use Raymond as leverage to get his money. The journey ends up being much longer than he anticipated, giving him time to get to know his brother, which changes their relationship as they travel.

What you have to understand is, four days ago, he was only my brother in name. And this morning we had pancakes.

Rain Man is great in many regards, but the stand-out to me was the unflinching look at the autistic character Raymond. It doesn’t shy away from showing the difficulties Raymond and his caregivers have to deal with, but it’s also very careful to show us how misunderstood and capable Raymond is. How many other movies show an autistic character in a sympathetic, even positive light? Most who understand autism will tell you that one of the hardest things to deal with is the stigma, the misunderstanding surrounding the condition, which leads to fear and ostracism. Where this film succeeds most brilliantly is not in giving a holistic understanding of the condition, but in giving the viewer sympathy for it so it’s not this taboo mystery thing to be feared—it’s something to be loved and even cherished despite its difficulties.

The purity of the subject matter is due in large part to lead actor Dustin Hoffman. An original draft of the script had Raymond as a happy and friendly mentally disabled man rather than a more withdrawn autistic savant, and it was at Hoffman’s insistence that the change was made. Hoffman also fought for the ending, which defies typical Hollywood expectations. He took the role so seriously that he spent a year working with autistic men and their families to really understand how autism and related relationships worked. He poured himself into the role, ad-libbing some of his scenes and spending off minutes rehearsing with his co-star Tom Cruise (sometimes switching parts to get into the other’s head), and was constantly worried that his performance would not be authentic enough. All that obsession paid off: this performance won Hoffman his second Best Actor award and it really made the movie.

I’ll admit (somewhat sheepishly) that, going into this film for the first time, I was worried it would be a bit hard to watch, as many issues-based films are. I’m happy to report that it’s absolutely not. This is a joy to watch. The main character Charlie is initially kind of a jerk, and his journey from wanting to use his newfound brother to wanting to love and protect him is deep enough to be heartwarming but subtle enough to be believable. And I don’t think you can get through this film without loving Raymond. There’s a real bond that forms between them, and it shows that people with autism feel things much more deeply than most people realize, even if they feel those things differently.

Rain Man is both a great drama and a great introduction to autism spectrum disorder. The intricacies of the characters and some adult themes probably preclude kids and younger teens from the audience, but more mature teens and adults should definitely see this film. Issues-based films should take note: this is how it’s done.