“Have you ever noticed how it just keeps destroying everything in its path but it never looks down?”

This film has been featured on an episode of my podcast about movies and mental health, Peculiar Picture Show!

Mark Twain once said, “If you send a damned fool to St. Louis, and you don’t tell them he’s a damned fool, they’ll never find out.” Now, Mark Twain clearly had something against St. Louis, but that’s not my point. My point is that if you’re ignorant about something and you live in a place where nobody is going to point that out to you, you’re likely to remain ignorant about that your entire life. I lived in small-town Florida for most of my adolescent and young adult life, and let me tell you: in those towns, it is very hard to come by people who will challenge you to think outside of the microcosm of small towns in America.

Colossal, written and directed by Nacho Vigalondo (Timecrimes, Extraterrestrial) and starring Anne Hathaway and Jason Sudeikis, is a high-concept film with a lot to say about life in a small town. It’s very metaphorical, but it’s hard to pin down exactly what it’s trying to say. That’s not a bad thing, because it has a lot to say and it will probably speak differently to different people. It’s kind of a dark comedy, kind of a story of redemption, and kind of a giant monster movie (in a literal sense). It got some bad reviews from people who likely missed the points it was trying to make and saw it as an ill-conceived monster movie, but there’s a lot here for people who are willing to dig into the film a bit more.

END_OF_DOCUMENT_TOKEN_TO_BE_REPLACED 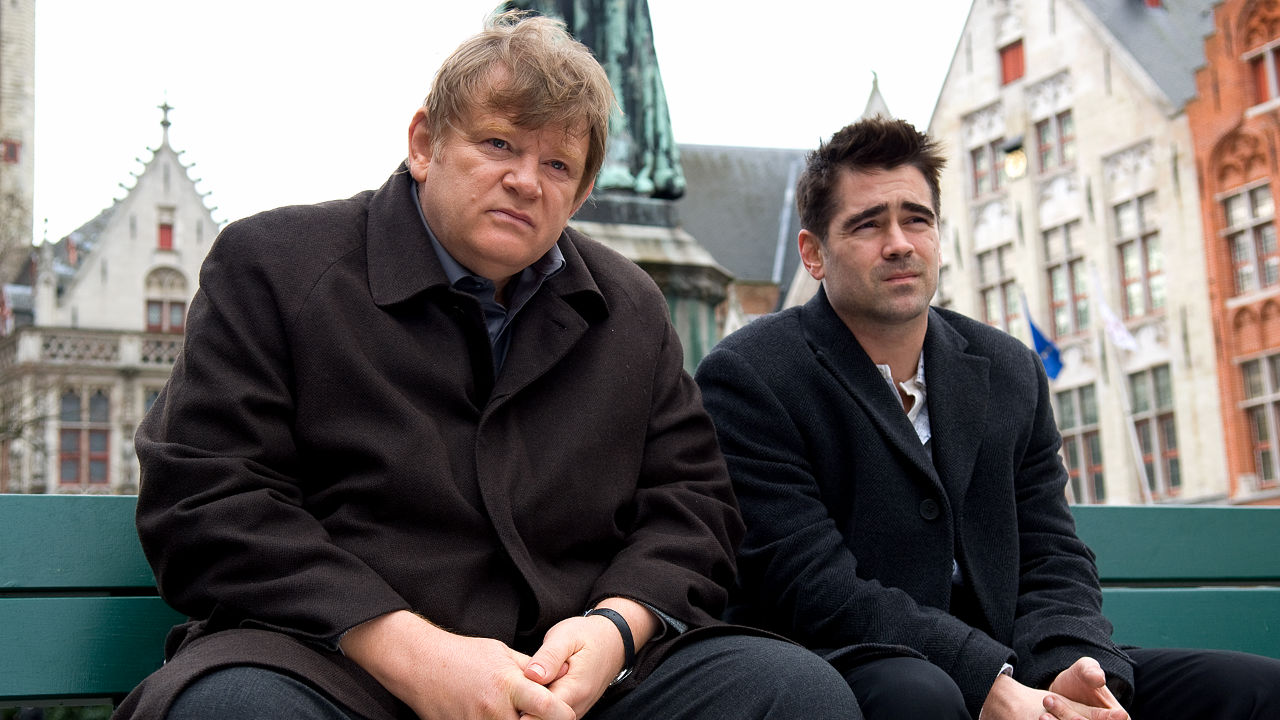 “I’m sorry for calling you an inanimate object. I was upset.”

There are many films about hitmen, but In Bruges is different. It doesn’t show a slice of life like similar films do. Instead, it uses light allegory, dark humor, and razor-sharp wit to tell a story of growth and atonement for two distinct characters who both happen to be hitmen. Written and directed by Martin McDonagh (Three Billboards Outside Ebbing, Missouri, Seven Psychopaths) and starring Colin Farrell and Brendan Gleeson, this film is at times funny and at other times depressing, and it goes way deeper than telling the story of a string of contracted hits. This film hits the deepest parts of the soul for these two flawed protagonists as they struggle emotionally with the lives they live. This film is funny, poignant, and definitely worth a watch.

END_OF_DOCUMENT_TOKEN_TO_BE_REPLACED

“A flop—that’s putting it mildly! We’ve found a disaster, a catastrophe, an outrage! A guaranteed-to-close-in-one-night beauty! … Springtime for Hitler: A Gay Romp with Adolf and Eva at Berchtesgaden. Wow!”

It’s been a long time since World War II ended, so it’s become more acceptable to joke about Hitler. But there was a musical parody of Hitler that hit much earlier. The Producers was released in 1967—a mere 22 years after the war ended—so it’s easy to forget today how audacious this film was in its time. Directed by Mel Brooks (Spaceballs, Blazing Saddles) and starring Gene Wilder and Zero Mostel, this film was made to be vulgar, and it’s the film’s audacity that makes it such an enduring classic. (Brooks’s parents were both Jewish immigrants who had escaped from WWII Europe, so if any director has a right to joke about Nazi Germany, it’s this one.) Honestly, Mel Brooks films are kind of hit or miss for me. I loved Spaceballs, but wasn’t so crazy about Blazing Saddles. The Producers, a movie about a flop, is a certified hit. This is one of Brooks’s finest films, and it’s stood the test of time, even warranting a remake in 2005 (that wasn’t nearly as good).

END_OF_DOCUMENT_TOKEN_TO_BE_REPLACED

This film has been featured in an episode of my podcast on movies and mental health, Peculiar Picture Show!

The 80s were a time of great financial growth, but also great greed, and Generation X was getting old enough to have an opinion about it. Gen X started their own cultural movement in the 90s and basically torched everything to the ground, but it started with some general unease in the 90s. Dead Poets Society, directed by Peter Weir (The Truman Show, Witness) and starring Robin Williams and a host of young talent, makes an interesting statement to the emerging Gen X ideology by showing how their parents dealt with that same problem of greed and success at the detriment of truth and beauty in the 1950s. This is admittedly not a universal movie—it delves deeply into Romantic and Transcendentalist ideologies and definitely appeals to lovers of old books more than the general population. But there’s a lot here that teenagers of any age will relate to. Whether you agree with Walt Whitman and Henry David Thoreau or not, there’s plenty to think about and plenty to like in this film.

END_OF_DOCUMENT_TOKEN_TO_BE_REPLACED

“You all say that it’s only one god. I say, no… there are two gods. One is the one who created us all. The other one is the one created by people like you.”

I’m not an expert in Bollywood film—in fact, before this past weekend, I had never watched a real one all the way through—but the category is so big, I know I can’t ignore it. Some guys at work recommended to me PK, the highest-grossing Bollywood film of all time. I have to say: I absolutely loved it. Directed by Rajkumar Hirani (3 Idiots, Munna Bhai M.B.B.S.) and starring Aamir Khan and Anushka Sharma, this film shows us a classic scenario: an outsider comes to a familiar setting (in this case, the city Delhi, which may be foreign to American viewers) and shows us how absurd we can be. But PK delves into some more philosophical issues and begins asking deeper questions about life and religion that I haven’t really seen in film before. This is also a fun, quirky comedy that’s entertaining throughout. If you’re wanting to get started in Bollywood film, this is a great place to start.

END_OF_DOCUMENT_TOKEN_TO_BE_REPLACED

“What I really want to do with my life—what I want to do for a living—is I want to be with your daughter. I’m good at it.”

Scruffy underdog wins the heart of the most popular girl in school. That’s a story that played out a lot in the 80s and 90s, but Say Anything manages to go deeper than most other films that follow this formula. Directed by Cameron Crowe (Almost Famous, Jerry Maguire) and starring John Cusack and Ione Skye, this film is simultaneously a teen love story and a metaphor for Generation X coming of age. It was for Gen X what The Graduate was for Baby Boomers and what Lady Bird was for Millennials: a chance for them to define their relationship with the previous generation, on their terms. The 80s were a time of great financial growth and security, but also rampant corporate greed and some unscrupulous actions, and Gen X had become old enough to say something about it. But it’s also a great teen love story with emotional depth and humor. Is this the perfect teen movie? If not, it’s awfully close.

END_OF_DOCUMENT_TOKEN_TO_BE_REPLACED

“And for what? For a little bit of money? There’s more to life than a little money, you know.”

Picture in your head a plot where a man hires two criminals to kidnap his wife so he can keep most of the ransom money paid by her father. There’s murder and a big investigation. Unless you’ve seen Fargo, I highly doubt the picture in your mind is set in small-town Minnesota. Written and directed by Ethan and Joel Coen (True Grit, The Big Lebowski) and starring Frances McDormand, William H. Macy, Steve Buscemi, and Peter Stormare, Fargo turns the normal police-investigating-a-string-of-murders plot on its head by focusing on simple, conservative small-town folks and largely incompetent, unsympathetic characters. These aren’t people in the dark underbelly of some large city, these are people who get excited when new stamp designs come out. Under the hood, this is a black comedy as well as a crime drama, and the writing is top-notch. If you’re looking for something different and clever without being over-the-top, this might be it.

END_OF_DOCUMENT_TOKEN_TO_BE_REPLACED

Biopic films have, to me, always seemed like pieces of a far-off history, far removed from my actual life. It’s very rare that one hits as close to home as I, Tonya did. Directed by Craig Gillespie (Lars and the Real Girl, The Finest Hours) and starring Margot Robbie, Sebastian Stan, and Allison Janney, this tells the real-life story of Tonya Harding, the infamous figure skater whose scandal rocked the world in the 90s. It’s a story I got a periphery glance at, through media headlines and rumors passed around school, but I never knew Tonya—only the scandal. This film lets you know Tonya, and it does an amazing job of bringing her to life in a way that’s not only sympathetic but also tragic. In-between tragic events are darkly funny happenings and self-aware humor that keep this from getting too depressing. This is a great story that adds some depth to events that I remember from my childhood, and it’s definitely one of the best biopics I’ve ever seen.

END_OF_DOCUMENT_TOKEN_TO_BE_REPLACED

“‘I would never want to belong to any club that would have someone like me for a member.’ That’s the key joke of my adult life, in terms of my relationships with women.”

Clever movies are a bit of a dying art. Nowadays, studios keep things pretty simple so nothing flies over the heads of their audience. Annie Hall, written and directed by Woody Allen (Crimes and Misdemeanors, Manhattan) and starring Woody Allen and Diane Keaton, is a film that’s clever to a fault. Some have said this is the greatest romantic comedy of all time, but I disagree—it’s not perfect, but that’s kind of the point Allen is trying to make. Much like the lead character Alvy, the film is smart and funny, but can be a bit condescending and has trouble connecting with people. This film was somewhat autobiographical for Allen, but he doesn’t romanticize his quirks and neuroses—he shows how they can be endearing, but also how they can be destructive. Overall, the film is intelligent, witty, and surprisingly deep in some spots, filling an odd void in the cinema world: admitting that it’s possible to be too smart for your own good.

END_OF_DOCUMENT_TOKEN_TO_BE_REPLACED

“Here are just a few of the key ingredients: dynamite, pole vaulting, laughing gas, choppers—can you see how incredible this is going to be?—hang gliding, come on!”

In 1996, before Wes Anderson was really making Wes Anderson movies, he made his debut with Bottle Rocket. He involved some of his friends, including Luke and Owen Wilson, neither of whom had acted before. This film is far from perfect and is definitely not Anderson’s best, but it was enough to crown him the new king of indie filmmaking and put Luke and Owen Wilson on the map. Woven into the story, you’ll see the themes that are so prominent in Anderson’s later works: subtle ennui, loneliness, and chronic abnormality, all glazed over with quirky humor and a rebellious streak. For his first feature film, this is actually a very impressive feat. The writing is clever, the story is memorable, and the soundtrack is killer. Overall, this is a pretty impressive indie comedy that’s a great glimpse into the formative years of Wes Anderson’s career in filmmaking.