“You know what kind of plan never fails? No plan. No plan at all. You know why? Because life cannot be planned.”

There was a lot of buzz in 2019 about Parasite, but I didn’t get a chance to see it until recently. I will say, it is every bit as great as the buzz makes it out to be. Directed by Bong Joon Ho (Okja, Snowpiercer) and starring Kang-ho Song, Sun-kyun Lee, and Yeo-jeong Jo, this South Korean dramatic thriller makes a powerful statement on wealth, class, and inequality. The story is complex, without clear antagonists and even protagonists (I really wasn’t sure who I should be rooting for in some spots), and we’re instead shown how unfair life can be for those without the good fortune to be born in the right places and families. The film has the neutrality of a good documentary, showing us the interesting and sometimes shocking events without making a strong comment on who’s right and who’s wrong. This is a film that left me thinking for long after the credits rolled, even days after I viewed the film.

END_OF_DOCUMENT_TOKEN_TO_BE_REPLACED 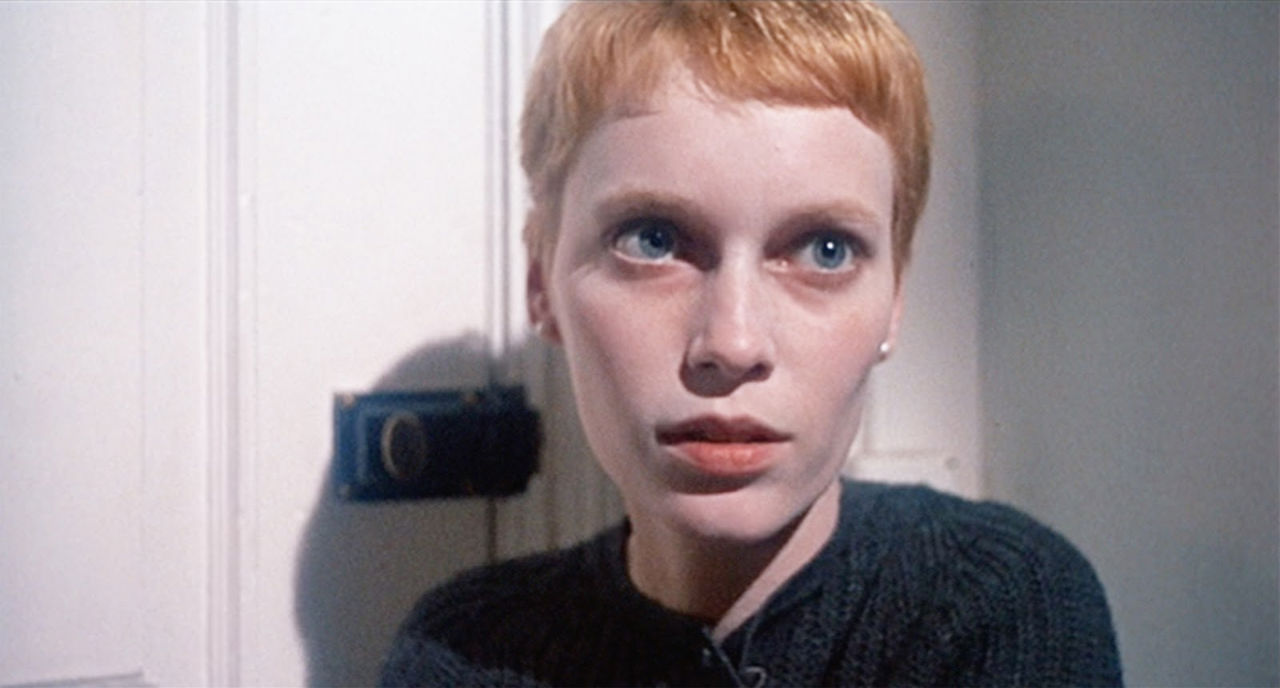 “He chose you, honey! From all the women in the world to be the mother of his only living son!”

Good horror movies seem to be a dying art. I grew up thinking I hated horror movies. It wasn’t until I went back to the classics that I discovered that I really liked some of them. The biggest change (aside from gratuitous use of jump scares) seems to be the transition from the power of imagination to bad CGI effects—no special effect will ever be as scary as what the brain can conjure based on context clues from other characters. Rosemary’s Baby, directed by Roman Polanski (Chinatown, The Tenant) and starring Mia Farrow and John Cassavetes, is a classic horror film that scares through restraint and subtlety, and what it doesn’t show is more terrifying than the special effects today, 50 years later. It’s also an exceptionally smart horror film, with a depth missing from most mass-market horror films today. Is this 50-year-old horror film worth watching today? Yes, absolutely.

END_OF_DOCUMENT_TOKEN_TO_BE_REPLACED

Bond films have been around so long that it’s hard to remember how innovative they were in the 60s. Now, there’s a precise Bond formula, and everyone knows what to expect in a Bond film—so much so that when Die Another Day turned the formula on its head in 2002, audiences hated it. If you’ve seen a few Bond films, you know what I’m talking about: James Bond finishes up a job, then reports back to his agency, where Q introduces him to some new gadgets. Then he meets the villain and does some gambling and wins. Then he meets the villain’s attractive female henchman. There’s lots of great action and witty one-liners to keep things light. Bond is suave and sophisticated, but tough when he needs to be. Some laws of physics are broken, but Bond films aren’t meant to be serious.

Well, that formula hasn’t been baked into every Bond film since the start. 1964’s Goldfinger, directed by Guy Hamilton (who would go on to direct other Bond films) and starring Sean Connery (the only real James Bond), may not have been the first film to feature the titular spy hero, but it was undoubtedly the first real Bond film. Its two predecessors were much darker in tone and different in structure to what we know as Bond films today. Goldfinger was the first to introduce us to Q and Bond’s gadgets, and lay out the blueprint for almost every Bond film to follow. It’s also probably the best the sprawling series has to offer. If you’re a stranger to James Bond, this is a great place to start. (Also, disclaimer: this is actually the first Bond film I’ve seen, so sorry if I get some of the details wrong here!)

END_OF_DOCUMENT_TOKEN_TO_BE_REPLACED

“Telekinesis… thought to be the ability to move… or to cause changes… in objects… by force of the mind…?”

Growing up, I’d been turned off to the horror genre for a few reasons. Horror films in general never really felt deep, emotionally speaking, and were full of stereotypes. They also seemed to revel in misogyny and weak female characters. 42 years after its release, Carrie is still a breath of fresh air. Directed by Brian De Palma (Scarface, Dressed to Kill) and starring Sissy Spacek and Piper Laurie, this was a landmark horror film that wasn’t content to stick to simple characters and situations. The character of Carrie White was painfully real and vulnerable, but strong in her own way, and the emotional core of the movie was raw and powerful. And, unlike most horror films, women run the show here—despite a gratuitous opening scene, there are some pretty empowering scenes here, as well as some open discussion of the hardships of being a woman. It honestly feels a bit dated today, but the tension and sense of dread hanging over the whole film is as heavy today as it was in 1976 and this still holds up as a classic and very influential horror film.

END_OF_DOCUMENT_TOKEN_TO_BE_REPLACED 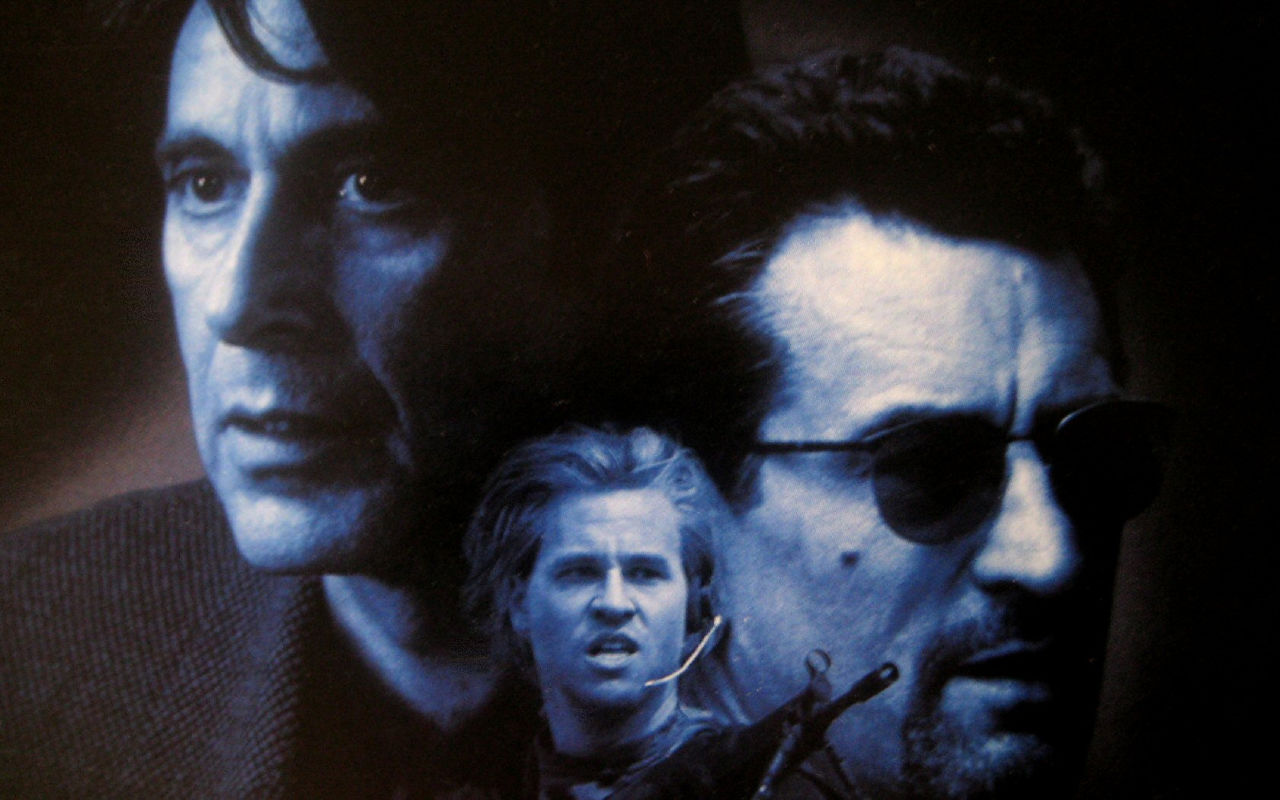 “A guy told me one time, don’t let yourself get attached to anything you are not willing to walk out on in 30 seconds flat if you feel the heat around the corner.”

Leonardo da Vinci once said, “Details make perfection, and perfection is not a detail.” Heat is close to the perfect crime film, in large part because it gets all the details right. Written and directed by Michael Mann (Ali, The Last of the Mohicans) and starring crime film legends Al Pacino and Robert de Niro, this film spends just as much time developing the antagonist as the protagonist—an idea which influenced the crime genre for at least a decade afterward. But the film got a lot of things right, from police procedures during a bank robbery and mannerisms of actual career criminals to the minutiae of failing marriages and relationships torn apart by reckless spending and substance abuse, and it did it through careful research and attention to detail that you really don’t see in most other films. This isn’t quite the most brilliant crime movie out there, but it’s probably the most detailed and it still makes for a very entertaining watch.

END_OF_DOCUMENT_TOKEN_TO_BE_REPLACED

1984 is one of my favorite novels, but I have to admit: in movie form, V for Vendetta does 1984 better than 1984. Directed by James McTeigue (The Raven, assisted on The Matrix) and starring Natalie Portman and Hugo Weaving, this is a highly political action-thriller based on a comic book written by the legendary Alan Moore. There are a few well-choreographed fight sequences and some good tension throughout, but what this film does best is talk about political ideas in a very down-to-earth manner. This was topical when it came out in 2005, but it’s become even more relevant in light of recent political events. (Fun fact: Trump supporters are leaving negative reviews on this movie every place they can, calling it liberal propaganda. That’s relevance!) It is a comic book film, so, although it’s more mature than most comic book films, it does have some larger-than-life characters and moments. That doesn’t hurt the point the film is making. In fact, it actually helps make the open discussion of these big ideas seem more real.

END_OF_DOCUMENT_TOKEN_TO_BE_REPLACED 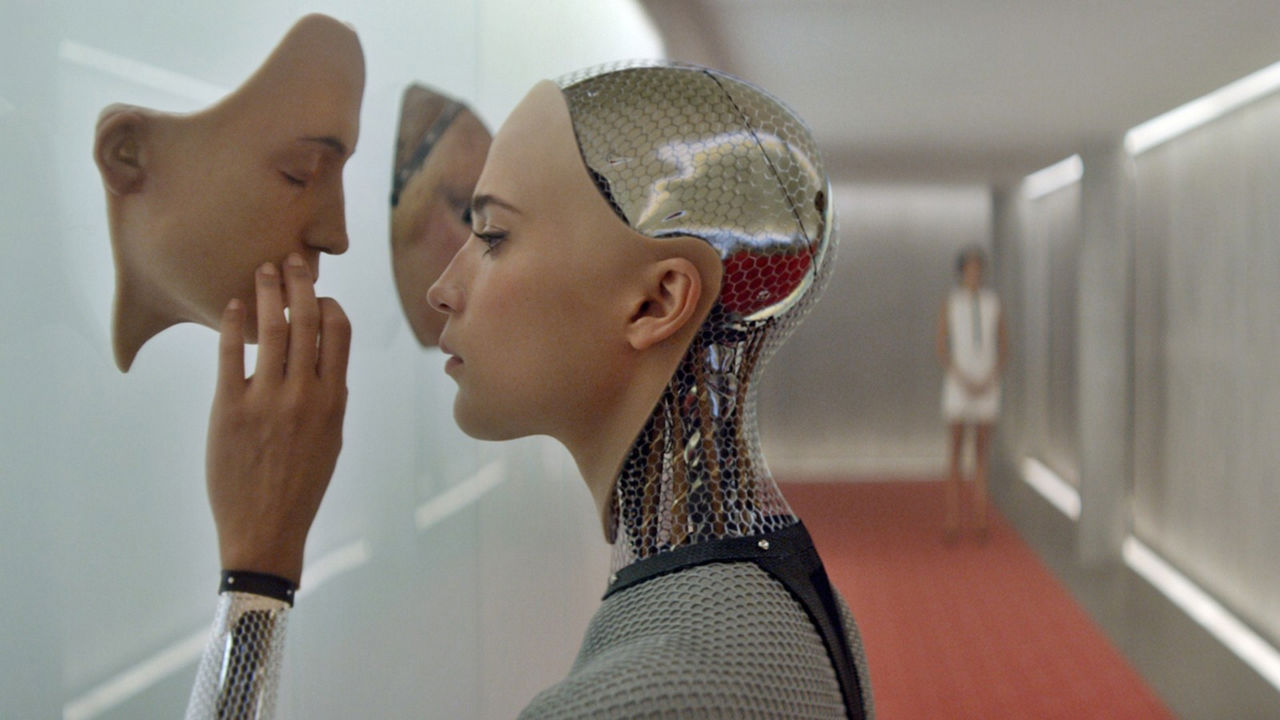 “Do you have someone who switches you off if you don’t perform as you should? … Then why should I?”

If you mixed together Mary Shelley’s novel Frankenstein with the 1982 film Blade Runner, you might get something kind of like Ex Machina. Written and directed by Alex Garland (his first effort as a director, writer of 28 Days Later and Annihilation) and starring Alicia Vikander, Domhnall Gleeson, and Oscar Isaac, this philosophical film is one of the best I’ve seen on artificial intelligence. In true sci-fi fashion, this film is not content to simply explain what AI is—it also asks what it means. But it’s also not content to be a boring discussion of ethics. This is a thriller just as much as it is a philosophical film, and I found it gripping.

END_OF_DOCUMENT_TOKEN_TO_BE_REPLACED

“People are being duplicated. And once it happens to you, you’re part of this… thing. It almost happened to me!”

Alien invasion movies were a pretty big thing in classic film. They asked lots of questions: What if they’re good? What if they’re bad? What if they think we’re bad and come to judge us? Invasion of the Body Snatchers, directed by Philip Kaufman (mostly known for writing the Indiana Jones movies) and starring Donald Sutherland and Brooke Adams, puts a bit of a different spin on it: what if they’re neither good nor evil, but so different that we can’t coexist? But this is not a boring morality study—this is a tense thriller! It doesn’t take the time to ask and answer a lot of deep questions, as many sci-fi movies do, but it moves quickly and is definitely not boring. If you’re in the mood for a tense and somewhat scary look at an alien invasion, this might be just what you’re looking for.

END_OF_DOCUMENT_TOKEN_TO_BE_REPLACED 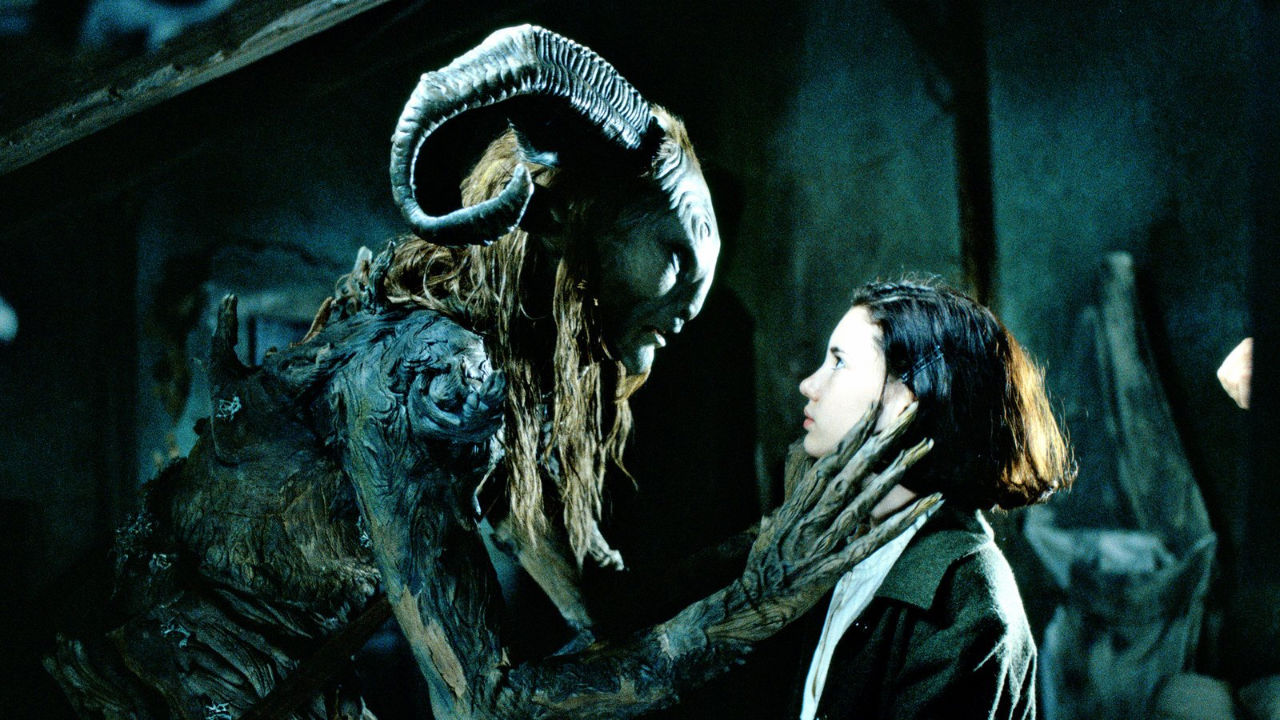 “You’re getting older, and you’ll see that life isn’t like your fairy tales. The world is a cruel place. And you’ll learn that—even if it hurts.”

Pan’s Labyrinth is really in a class of its own. Directed by Guillermo del Toro (The Shape of Water, Pacific Rim) and starring Ivana Baquero, Ariadna Gill, and Sergi Lopez, this is a curious mix of fairy tale and brutal war film, and it’s more imaginative than just about any other movie on this list. The movie comes to us from Spain, and it’s set during the Spanish Civil War (1936-1939). We see most of the film through the eyes of the young girl Ofelia, who isn’t completely aware of what’s going on with the war and instead finds herself thrust into a fairy tale world of fauns, fairies, and monsters, traveling back and forth between the worlds and seeing things unfold in both. There’s a deeper story, of course: Ofelia’s adventures in the fantasy world she discovers serve as an allegory for what’s going on with the war, and there are strong parallels between the two worlds in the film. This film is brilliant, beautiful, magical, and at times quite creepy, and there’s really nothing else like it.

END_OF_DOCUMENT_TOKEN_TO_BE_REPLACED

“My mommy always said there were no monsters—no real ones—but there are.”

It’s rare that a sequel surpasses the original. Terminator 2 and The Dark Knight come to mind. I’m actually pretty new to the Alien franchise, but, after watching the second installment, I believe Aliens fits that bill too. Alien was a brilliant movie, but the sequel Aliens was phenomenal. Directed by James Cameron (Terminator 2, Avatar) and starring Sigourney Weaver, Michael Biehn, and Paul Reiser, this is an action-packed sci-fi thriller that maintains the depth and suspense of the original but brings the energy up to the highest frenetic levels.