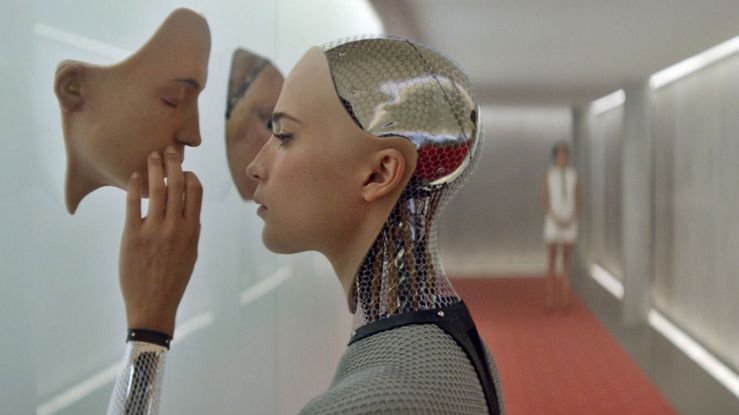 “Do you have someone who switches you off if you don’t perform as you should? … Then why should I?”

If you mixed together Mary Shelley’s novel Frankenstein with the 1982 film Blade Runner, you might get something kind of like Ex Machina. Written and directed by Alex Garland (his first effort as a director, writer of 28 Days Later and Annihilation) and starring Alicia Vikander, Domhnall Gleeson, and Oscar Isaac, this philosophical film is one of the best I’ve seen on artificial intelligence. In true sci-fi fashion, this film is not content to simply explain what AI is—it also asks what it means. But it’s also not content to be a boring discussion of ethics. This is a thriller just as much as it is a philosophical film, and I found it gripping.

The film opens with young programmer Caleb winning a contest to spend a week with enigmatic tech giant Nathan at his private estate. Upon arriving, Caleb discovers that he won’t merely be hanging out with Nathan—he’ll be evaluating his new artificial intelligence, Ava, as an impartial observer. Ava is far more intelligent and emotional than any system Caleb’s ever seen, and he soon begins to suspect that there’s more going on at the estate than he realizes. As he begins to unravel that mystery, both Nathan and Ava increasingly ask for his loyalty, forcing him to make some difficult decisions.

Other films have tackled artificial intelligence before, including 2001: A Space Odyssey in 1968 and the brilliant Blade Runner in 1982, but few have gone as deep as Ex Machina. The 2001 film AI spent a lot of time on this, but that film was primarily emotional. Ex Machina is a thinking film, and it very succinctly poses the questions that should be asked about true artificial intelligence. It doesn’t try to prescribe answers or preach at us—it merely asks us to think, and shows us how complex these issues can be. This film is morally ambiguous from start to finish, and simple questions of good and evil are not asked here. Does an AI deserve the same freedoms as a human? And at what cost? These questions don’t have easy answers, but the film does an excellent job of getting us to ponder them.

But as I mentioned, this is as much thriller as science-fiction. Almost immediately upon Caleb’s arrival at Nathan’s estate, there’s some underlying tension and a real sense of danger. Something just seems off, but it’s difficult to know what’s off. That tension and vague dread build steadily throughout the film into an intense finale. It’s a game with three players. Alliances are made and broken, and power passes between the players quite often. We see things through the eyes of Caleb, but both Nathan and Ava have some tricks up their sleeve as well. This is one of those rare films where I had no idea how it was going to end. Not that the ending was shocking, but it certainly wasn’t predictable.

Ex Machina bridges a gap between two genres that don’t often interact: philosophical science-fiction and tense thriller. It’s not the masterpiece that Blade Runner was, but it asks more pointed questions and spends more time exploring them. As Garland’s first directing effort, there are a few missteps—there are dramatic pauses that linger too long and conversations that feel forced. But overall, this is a great film that will make you think and hold your attention throughout. If you’re a fan of science-fiction, I highly recommend this film.