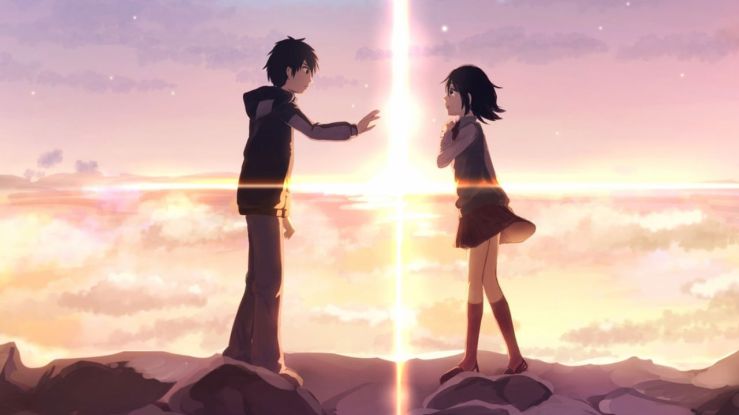 “The dream I must have had, I can never recall. But… the sensation that I’ve lost something lingers for a long time after I wake up.”

I’ve said it before, but I’ll say it again: I’m typically not a fan of anime, just like I’m typically not a fan of horror movies. But some movies, like Psycho and The Shining, are so good that they rose above the trappings of the horror genre. Your Name is a movie that rises way, way above the trappings of your typical anime. Directed by Makoto Shinkai (The Place Promised in our Early Days, 5 Centimeters per Second), this is the only anime movie to out-gross Spirited Away, which was a classic I’ve reviewed before. It’s one of the best love stories I think I’ve ever seen. There is a touch of the supernatural in this, but rather than that being the focus, it serves to enhance the drama and romance in the film that remain the focal point. This is a beautiful story beautifully told, and the fact that it’s an anime actually makes it better—that format tells the story better than any other would. Anime skeptics take heart: you will probably like this film.

The plot follows two teenagers: Taki, a confident and driven boy, and Mitsuha, a sweet and more reserved girl. They inexplicably start switching bodies two or three times a week. As you can imagine, this is quite chaotic and jarring for them, but there’s a catch: they forget their experiences almost as soon as they wake up in their normal bodies. Through unexplained memory gaps and comments from friends, they eventually figure it out and start working out a system to keep each other in the loop with what happened, since they’re initially more annoyed by this phenomenon than amused. Even without ever talking, the two begin to grow close and care for each other, and eventually seek each other out. This proves much more difficult than either of them imagined.

Treasure the experience. Dreams fade away after you wake up.

The main characters and story are amazing in Your Name, but the relationship that develops between the two characters is stirring, inspiring, and extremely memorable. I’ll admit, I’m not really a romance movie aficionado, but I was more emotionally invested in this romance than any other I’ve seen. The Japanese believe that a cord of fate binds lovers across time and space, and this film will make you believe it—Taki and Mitsuha belong together, and are incomplete without each other. The story also never ventures too far into melodrama or over-sentimentality. I never rolled my eyes or felt emotionally manipulated. Other romance films should be taking notes—this is what a gripping love tale looks like.

Emotionally, this movie does everything a teen romance should. There are light moments when you see the characters bonding or you’re laughing at the inevitable awkwardness of a teenage boy and girl switching bodies. There are sad moments when the characters desire to be together but can’t, and some of their lingering feelings of emptiness are nearly heartbreaking. It’s a great balance of light moments, emotional moments, and real tension. I won’t give the ending away, but I will say that I really enjoyed that too.

Your Name is a touching and amazingly well-written teen romance that also happens to be an anime. There are a lot of great things about it that I didn’t mention, including the voice acting and the soundtrack. I can’t really think of anything I didn’t like about this film. Even if you’re not an anime fan, give this one a try. It may not change your mind about the genre, but it will probably change your mind about this film.