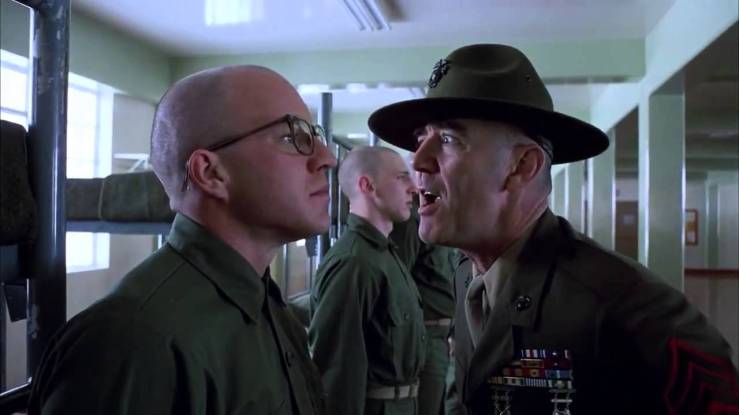 “If you ladies leave my island, if you survive recruit training, you will be a weapon. You will be a minister of death praying for war. But until that day, you are pukes. You are the lowest form of life on Earth. You are not even human beings.”

There are a lot of good movies about war. Full Metal Jacket is a movie about soldiers. Directed by Stanley Kubrick (The Shining, 2001) and starring Matthew Modine, Vincent D’Onofrio, and R. Lee Ermey, this movie shows how war affects soldiers, but each soldier responds a little differently. In true Kubrick fashion, the message is not neatly wrapped and handed to the viewer, and it’s ultimately up to the viewer to decide what he or she feels afterward. Also in true Kubrick fashion, the movie is absolutely brilliant and masterfully executed. It stands out as a deeply personal war film with excellent art direction that’s worth seeing today.

The story is set in the middle of the Vietnam War and is split into two halves. The first half takes place in boot camp where a group of new marine recruits begin their training (or reconditioning) under an extremely harsh drill sergeant. We see the recruits pushed to the brink of madness, and then some are pushed further. At the midway point, the recruits graduate and move on to the actual Vietnam War, where they quickly discover that the intense boot camp still pales in comparison to the horrors of war. Even moments when they anticipate glory are empty and devoid of any honor. And much like the grueling boot camp, we see the pressure destroy some people while others endure.

I wanted to see exotic Vietnam, the crown jewel of Southeast Asia. I wanted to meet interesting and stimulating people of an ancient culture… and kill them. I wanted to be the first kid on my block to get a confirmed kill.

This is a Kubrick movie, so the technical aspects are top-notch. The cinematography, music selection, script, and actor performances are all spectacular. The best parts, though, were the memorable roles of Sergeant Hartman, Private Joker, and Private Gomer Pyle. All the characters are well-defined and fleshed out, but these three are outstanding. D’Onofrio’s performance as the oafish Private Gomer Pyle takes the top spot due to one hard-hitting broken-beyond-hope scene. (You know the one.) Kubrick has a reputation for pushing his actors to perfection, and this scene is absolute horrifying perfection. In case you haven’t seen it, I’ll leave it at that.

I won’t lie: Full Metal Jacket is a hard movie to watch. While other war movies focus on heroics and sacrifice, this movie portrays the raw, brutal reality faced by front-line soldiers, and the pressure turns many of them into villains rather than heroes. War (or, at least, the Vietnam War) is shown to be pointless and soul-crushing, and honor is unrewarding and unappreciated. Even in the midst of desolation, though, hope prevails. Not all of the soldiers in this movie are heroes, but the ones who are heroes in spite of the immense pressure, even when no one wants them to be, end up being much more heroic than those in movies where everyone’s a hero. It walks a careful line of turning a critical eye to war while still honoring its heroes.

Full Metal Jacket is a brilliant but difficult movie. It shows the horrors of war and its toll on soldiers better than any other movie, but the movie’s emotional brutality and sense of hopelessness may be too much for some viewers. Nevertheless, it’s an outstanding character-driven war movie that doesn’t spoon-feed its message to the viewer. It also has some of the most iconic scenes I’ve seen in any war movie, making this a must-see for any fans of war films.