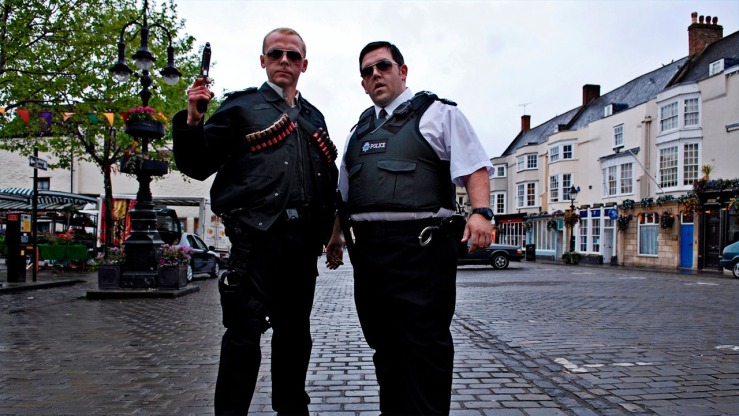 “Let’s just say that we won’t be short of Chunky Monkey for the next month!”

We’ve had cop movies, and we’ve had funny cop movies, but I can’t think of another quirky British parody of a cop movie, let alone one that’s so hilarious as this one. Hot Fuzz, directed by Edgar Wright (Shaun of the Dead, Scott Pilgrim vs. the World) and starring Simon Pegg and Nick Frost, is at once familiar territory, parodying famous cop movies, and also delightfully different, set in a small British town in the country. The combination makes for one of the best parodies I’ve ever seen, and it’s a very good comedy in its own right as well. The Wright-Pegg team matured a lot since Shaun of the Dead, and the brilliance and execution of this movie mark a point when both truly hit their stride.

The movie opens with exemplary police officer Nicholas Angel progressing quickly through the ranks of the London police force, excelling at everything he attempts. He’s so good at his job that he makes the rest of the police force look bad, so he’s transferred to a small police force in Sandford. The police officers there scarcely know how to do their jobs and get most of their ideas about real police work from watching Point Break and Bad Boys 2. Angel quickly discovers something strange is going on. A string of murders are framed as accidents, and the police refuse to admit that they could be more than accidents. He must uncover the mysteries of what’s going on as well as why the police force won’t investigate—and eventually escape becoming a statistic himself.

Have you ever wondered why, why the crime rate in Sandford is so low, yet the accident rate is so high?

Hot Fuzz is a brilliant parody of modern police action movies. It shows a deep understanding of how those movies work, but it does so by portraying characters who have only a cursory understanding of real police work. Angel’s buddy Danny Butterman wonders aloud when his job is going to reflect the iconic scenes he’s seen in movies, and he even goes as far as re-enacting some of them in a meta joke that actually works. The first half of the movie is actually fairly slow to show what life in Sandford is like; but once the top gets blown off, things escalate extremely quickly, culminating in a hilariously over-the-top epic cop movie showdown. As Angel quotes Bad Boys 2, “Shit just got real.”

But don’t think that this movie is senseless satire. Though the situations are ridiculous, the characters are not. They’re all well-written and three-dimensional, and there are even a few touching moments between them. The same buddy dynamic that was present in Shaun of the Dead is here too, and it’s actually executed a little better. Seeing the high-strung Nicholas Angel unwind with the dim but loveable Danny Butterman while watching the cop movies they dream about was a very sweet moment, and seeing Angel eventually win over and inspire his comrades is very gratifying.

If you’re a fan of cop movies or quirky British comedies, I highly recommend Hot Fuzz. It’s an intelligent satire of its source material, and a clever comedy on its own. There’s quite a bit of foul language that somehow seems less foul because of the British accents, and there’s some graphic violence at times, although it’s very over-the-top and even comical. Overall, though, this is a fun movie that many will appreciate, and I hope to see more parodies like this one.