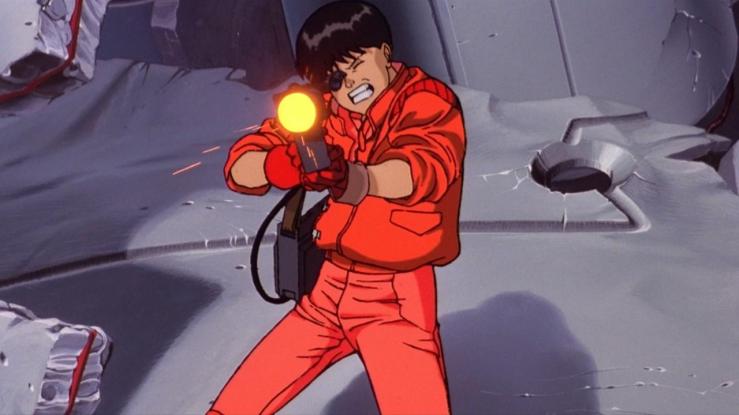 “What if there were some mistake and the progression went wrong and something like an amoeba was given power like a human’s?”

I wouldn’t describe myself as an anime fan. I like some of the better movies and series, but there’s a lot of the genre I don’t particularly enjoy. The few other anime on this list, I’ve described as being different than your typical anime—full of rich drama and characters that will appeal to movie-watchers who wouldn’t normally get into anime. Akira, on the other hand, is pretty much exactly what you’d expect from an anime: a psychic guy attacks a futuristic city and it’s up to a teenage boy to stop him. This seminal anime film is written and directed by Katsuhiro Ôtomo (Steamboy, Mushi Shi: The Movie), and the fact that this feels like a lot of other anime is a testament to how influential it was in 1988, before the typical anime really existed. This film was huge in Japan, and it opened the door to the Western world for anime, where the genre had previously gone largely unnoticed. Is it good? Well, yes, it’s very good. It’s got a great sci-fi plot, a gritty dystopian setting, and action that’s entertaining without being so over-the-top that it’s ridiculous. It feels a bit like a cross between an action movie, 2001: A Space Odyssey, and 1984. Again, I wouldn’t describe myself as an anime fan, but this is one of the best movies the genre has to offer, and it’s endured as a classic for a reason.

(Note: there are actually several English dubs for this, as well as the original Japanese audio with English subtitles. The 2001 dub is actually pretty great and the language and acting felt very natural. I can’t speak for the others, but the 2001 dub does not detract from the experience.)

The plot focuses on Kaneda, a teenage leader of a bike gang in Neo-Tokyo (Tokyo rebuilt after World War III wiped most of it out), and Tetsuo, his sidekick in the gang. In a fight with a rival gang, Tetsuo is injured and taken to a hospital, but it’s discovered that he has latent psychic powers, so he’s carted away to a research facility to awaken his powers. Sick of being the runt always in need of help, Tetsuo escapes and uses his newfound powers to bully everybody from his old life, then he sets out to awaken the powerful psychic Akira who may have started World War III. The military is sent out to stop him, but Kaneda knows it’s going to come down to him and his old best friend fighting with the fate of Neo-Tokyo hanging in the balance.

The future is not a straight line. It is filled with many crossroads. There must be a future that we can choose for ourselves.

There are a lot of things Akira does extremely well, but the stand-out for me was the way the film balanced deeper philosophical and ethical concepts with action and excitement. The film moves as fast as any good action flick, but the characters find the time to discuss the ethics of human experimentation and the depth of human potential, and there’s even an undercurrent of rampant greed and corrupt government. There’s a lot packed in here, but the film’s not especially hard to follow—at least, not until the ending. I’m not going to spoil it, but the ending take a page from 2001: A Space Odyssey and goes full philosophical on us. There’s still debate today over what the ending means, although it’s not so obfuscated that you won’t be able to arrive at your own conclusions with some thought.

This is a product of the 80s, so the idea that adults are greedy and corrupt runs strong here. In fact, the younger a character is in this film, the more pure and selfless they are. Kaneda, Tetsuo, and the gang of teens are caught in the middle, between innocence and corruption, and that struggle is key to understanding parts of the film. Though Kaneda and Tetsuo eventually come to clash, neither one can completely commit to good or evil, even if their choices look pretty clear-cut. The film asks not only what is the cost of corruption, but also what is the cost of innocence, and there are no easy answers.

Akira is a true science-fiction in that it deals with philosophical and ethical questions about our intellectual leaps forward, but it’s got a good dose a badass anime action and a rich world that come together to create something wonderfully complex and entertaining. If you really don’t like anime, be aware that this is the quintessential anime film, the one that wrote the playbook for most to follow. But it’s also the best typical anime film ever made and does what it does so well that it might make a fan out of even people who have been turned off to the genre. This film made an impact in 1988 that is still felt today, and it stands out as one of the classics of its genre.