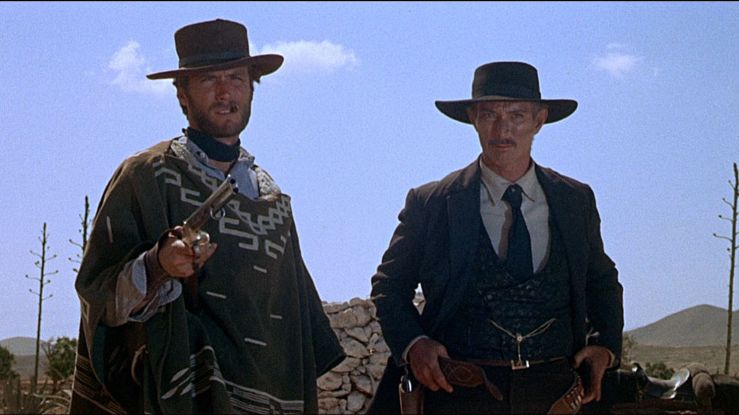 “Where life had no value, death, sometimes, had its price. That is why the bounty killers appeared.”

For a very long time, America loved classic Westerns. In 1964, an Italian director shook things up with A Fistful of Dollars, an amazing Western that actually got noticed in America. In 1965, director Sergio Leone (Once Upon a Time in the West, The Good, the Bad, and the Ugly) followed up on his smash hit with another amazing Western: For a Few Dollars More. Starring Clint Eastwood, Lee Van Cleef, and Gian Maria Volante (two of whom starred in the previous movie), this showed the world that Leone was more than a one-hit wonder and was one of the masters of this American genre. The first film of the trilogy, A Fistful of Dollars, had an excellent plot, and the third film in the trilogy, The Good, the Bad, and the Ugly, had superior atmosphere. For a Few Dollars More was right in-between. This sadly means it wasn’t quite as good at either of these things, making it something of a weak link in the trilogy. But the mixture of elements was excellent and this is, in many ways, the quintessential classic Western. It holds up very well today.

The plot follows a bounty hunter, the man with no name (who is called Manco in this film). He discovers a large bounty on the head of El Indio, a violent bandit, and decides to go after him and his gang. But when he meets Colonel Douglas Mortimer, an older bounty hunter with his sights also set on El Indio, he forms a reluctant partnership with this man who is, in many ways, his equal. El Indio proves to be a fierce opponent, but his violent past may catch up with him before he realizes it.

Tell me, isn’t the sheriff supposed to be courageous, loyal, and above all, honest? … I think you people need a new sheriff.

Director Sergio Leone proved himself to be one of the finest Western movie makers of all time, and this film is a classic on all levels. The soundtrack is as classic as they come, scored by Ennio Morricone, who scored the rest of the trilogy as well. The villain is brutal (especially for the film’s era), but also multifaceted and human. Clint Eastwood’s character is basically the same superman gunslinger from the first film, and he’s matched by Lee Van Cleef’s character—so much so that the scene where the two meet basically turns into an old West dick-measuring contest, and it’s hilarious. And there are plenty of scenes, like when Manco is playing cards with one of his bounties, that may not be the most realistic, but are undeniably cool and very badass. There are things that other Westerns may have done better, but as far as the whole package, this is one of the best of the genre.

I’m one of the people who was bored with classic Westerns growing up, and I’m pleased to say that this film reinvigorates what was, in 1965, rapidly becoming a tired genre. This is a fun film to watch, and it’s very accessible. Don’t let that fool you into thinking it goes light on plot or character development, though. The film starts out simply enough, but there’s some amazing depth given to both bounty hunters and the villain—it actually caught me by surprise with a big reveal near the end. There’s some great depth to the characters and plot, and it serves to make an already fun movie even more entertaining. It’s also more intense than older Westerns—so much so that Leone unintentionally broke numerous Hollywood censorship rules and his film couldn’t be released in the United States until after those rules loosened up in 1967. If you’re like me and never had much fun with stale and tame classic Westerns, this is miles ahead of them.

For a Few Dollars More is not a perfect film, but it’s a perfect example of everything a classic Western should be. The plot shows us the Wild West without being gratuitous, the characters are memorable and well-developed, and the mood, while not quite as great as this film’s sequel, is still excellent. If you want something a little more exciting than the old classic American Westerns, or just want to check out the films for which we coined the term “spaghetti Western,” check this one out. Better yet, watch the whole trilogy.